Once the practice of diamond fashioning had begun, early stones in the form of point cuts, cutters quickly became aware that their actions had an influence on the beauty of the finished stone. The angles of the pavilion facets proved to directly correlate to the stone’s ability to return light in the direction of the viewer’s eyes. A table facet improved the appearance of a stone immensely. The first table cuts were, in fact, pyramidal point cuts with one point removed completely and the other turned into a flat culet.

The rough diamonds that were available in the renaissance all came from the Golconda diamond fields in India. One has to consider that perfect octahedrons were the most popular shape in India. These stones were likely never to reach Europe. A lot of rough that found it’s way to Europe had odd shapes that were unwanted in India. It is these ‘rejects’ that forced the European cutter to become creative in it’s cutting designs.

The main objective of any cutter is weight retention. The second is the appearance of the stone which comes forth from the internal and external light reflection, also known as brilliance. The Renaissance cutters quickly discovered that pavilion angles of 45° were giving them stones with excellent brilliance. When possible, the crown would be cut at 45° as well.

The Point cut with one tip cut off. It has 4 main facets on the pavilion together with a culet. The crown features four main facets and a table facet. These stones were square or rectangular in shape and are the predecessors of the Emerald Cut and the Square Cut.

There are many historical Table Cuts that display rounded or blunt corners. This is due to the fact that out many pieces of rough, such as a macle or half an octahedron a larger gem can be cut when two corners are sacrificed. 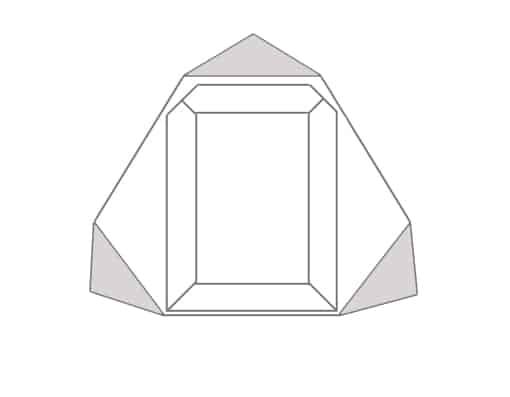 Full table cuts have been in fashion throughout the Renaissance. Only a few have survived to see this day; they had excellent proportions to be recut to a modern Brilliant Cut. 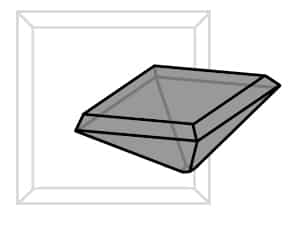 Diamonds are often found as twinned crystals (macles). These crystals are often very shallow and were subsequently relatively cheap due to their unfavorable form. In order to retain as much weight as possible, these stones and other flat pieces of rough were often cut as mirror stones with a very large table and a shallow pavilion. The cut received its name from the mirror-like reflection of the large table facet.

The step cut is the predecessor of the Emerald Cut and Asscher Cut. Step cuts have main facets that are built up horizontally: the crown and pavilion are built up out of steps. This way rough that hasn’t got enough depth can still be cut into a large stone with reasonable light effects.

A square table cut characterized by the diagonal cross made up out of the crown‘s main facets and the table facet.