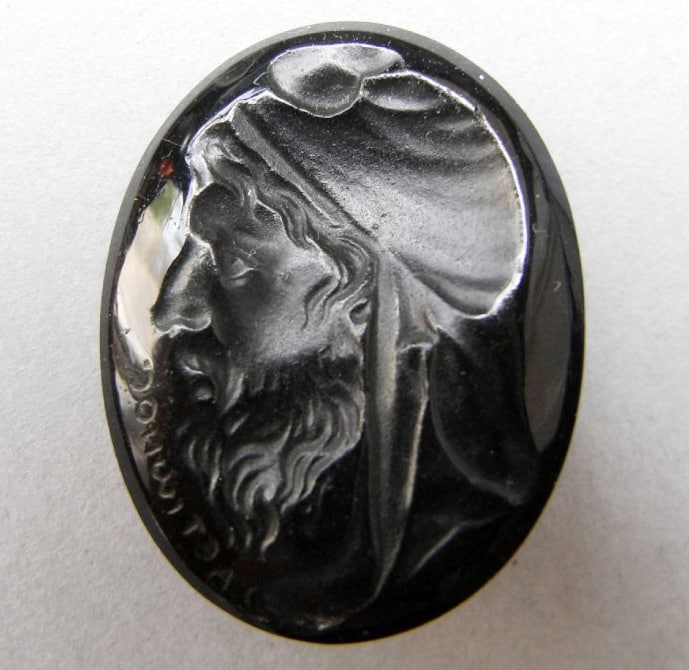 A Tassie is a paste or glass copy of a cameo or intaglio. James Tassie (1735-1799), a Scottish gem engraver, created replicas of ancient engraved agates and gemstones following his career as a glyptographer. Experimenting with enamels and working with Dr. Quin of Dublin they came up with an opaque glass that could replicate any color or pattern. Tassie took his business to London and established himself as a serious craftsman creating his replicas using his own very high and exacting standards.

Tassies were created using a molding process. The models for his replicas were crafted by fine artists of the day and included classical subjects, proverbs, and portraits of royals and other noted personalities. The contemporary portraits were modeled from life whenever possible and cast in white enamel then mounted upon a darker color background. The wide variety of subject matter and detailed execution made tassies popular with collectors.

James was succeeded by his nephew William (1777-1860) and later by James Wilson. Various other companies copied the idea and literally hundreds of thousands of these glass replica cameos and intaglios were made. Some of those made by James carry a mark ‘T’ or ‘Tassie F’, the ones made by William are marked ‘W Tassie F’. In addition, Tassie made casting models for Josiah Wedgwood to use in creating his jasperware cameos.