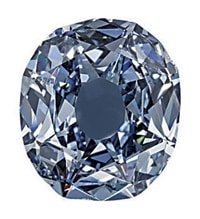 It’s that rare diamond that could match its color to the blue-blood of its various royal owners. It’s been used as part of a dowry and as collateral for a loan. In the early 1960s, the Wittelsbach diamond was almost lost forever when a Belgium diamond cutter was commissioned to re-cut the stone. Fortunately the diamond cutter – understanding the magnitude of destroying such an impressive stone – refused to perform the cutting. Instead, he created a consortium to purchase the fabled blue diamond thus preserving it in all its original glory. Especially grateful for the diamond cutter’s decision will be the Wittelsbach’s future new owner, the identity of which will be known in December of 2008 when the stone goes on the auction block at Christie’s of London.

What makes the Wittelsbach so special in the gem world is its classification as a rare type IIb blue diamond. Weighing in at 35.56 carats and measuring 24.40 mm in diameter and 8.29 mm in depth, the diamond is cut with fifty unusually placed facets and is said to be of excellent clarity, except for some minor surface scratches.

History’s first mention of the Wittelsbach diamond appears in 1664, with ownership by King Philip IV of Spain. How the diamond came into the Spanish King’s possession remains a mystery. Ownership records that had been kept in the Madrid archives were destroyed during the Spanish Civil War. What we do know is that when the Infanta Margareta Teresa became betrothed to Emperor Leopold I of Austria, Philip IV decided to make the blue diamond part of her dowry. But when the Infanta died in 1675, unexpectedly at a very young age, all her jewels passed to her husband.

With the blue diamond now part of the Austrian royal family, it was given – along with the rest of the late Infanta’s dowry – to Leopold I’s third wife, the Empress Eleonore Magedalena. Eleonore then passed the “Great Blue Diamond” on to her grand-daughter, Archduchess Maria Amelia, daughter of Emperor Joseph I. In 1722 the Archduchess married the Bavarian Crown Prince Charles Albert. It was at this point that the diamond became a part of the collection of the ruling House of Bavaria, the Wittelsbachs, and thus acquired its name. At that time a value of 240,000 guilders was applied to the diamond.

Shortly after the diamond came into the Wittelsbach family it was pledged to a banker as collateral so that the royal family could borrow some much-needed money. Four years later it was redeemed from the bank, along with a gold dinner service, for 543,781 guilders. Once Charles Albert became the Elector he became so enamored of the stone that he had it reset several times, with each setting surpassing the prior one in beauty. Later, Maximillian III set the diamond in a very elaborate floral design with the help of a Munich jeweler. The design incorporated over 700 diamonds, including a large pink diamond. The last monarch destined to wear the diamond was Louis II, King of Bavaria, who remained on the throne until Germany became a republic in 1918. With the end of World War I, all the possessions of the House of Wittelsbach were placed under the control of the State. The result created an impoverished royal family. Seeking a way to ease the royal family’s financial problems, the State decided to sell off some of the Crown Jewels, including the Wittelsbach diamond.

At a Christie’s auction in London in 1931, the Wittelsbach was the first up of 13 lots on the block. When the hammer came down at £5,400 to a mysterious buyer named Thorp the feeling at the time was that the diamond had not met its reserve and therefore actually remained unsold. Yet the Wittelsbach did not return to Munich. Its disappearance caused rumors to run rampant as to its fate. “Where was the Wittlesbach?” Was it sold on the black market?

The answer did not come until the diamond resurfaced in Belgium for sale in 1951 and again in 1955. Then, at a World Exhibition held in Brussels in 1958, an unidentified large blue diamond was displayed without anyone’s realizing that it was the missing Wittelsbach. Later, in 1962, the same blue diamond was presented for re-cutting to a Belgian diamond cutter named Komkommer. Recognizing immediately that the diamond was probably of great historical significance, he refused to re-cut it. Through extensive research, Mr. Komkommer was able to trace the blue diamond back to the House of Wittelsbach. With its identity now restored, Mr. Komkommer put together a consortium to purchase the ‘rediscovered’ Wittelsbach blue diamond. It was held in trust for an unidentified estate until 1964 when it was sold to a private collector.

In a Reuters’ news story dated November 3, 2008, Christie’s of London announced that the Wittelsbach blue diamond will be up for sale at their December 2008 auction. Industry experts expect the rare stone to sell in the neighborhood of $15 million dollars. This sale presents the stone to the international market for the first time in eighty years.

At Christie’s auction 7634: Jewels: The London Sale, held on December 10, 2008, the hammer came down for the Wittelsbach diamond at $24,262,008 (including buyer’s premium), far exceeding pre-sale estimates and breaking the world record for any diamond sold at auction. The buyer is reported to be famed London Jeweler and collector Laurence Graff.

Laurence Graff struck a deal with the Smithsonian to exhibit the newly re-cut Wittelsbach diamond, now named the Wittelsbach-Graff. Graff re-cut the 35.56 carat diamond to 31.06 carats in order to improve clarity, clean-up bruises and chips and enhance the stone’s brilliance. The Gemological Institute of America has graded the stone as Internally Flawless Type IIb and they have stated “… is the largest Flawless or Internally flawless, Fancy Deep Blue, Natural Color we have graded to date…”

In a once-in-a-lifetime opportunity, the Wittelsbach-Graff and Hope diamonds will be on display together at the Smithsonian Institute from January 28, 2010, until August 1, 2010. Never before have two such amazing blue diamonds been exhibited together. While the Wittelsbach-Graff is at the Smithsonian, scientists will endeavor to discover whether these extremely rare blue diamonds originate, as has been rumored over the years, from the same mine in India. This is a question that has intrigued gem lovers for centuries.

Despite their uncanny similarities in history, color, and phosphorescence, our study clearly shows that the Wittelsbach-Graff and Hope diamonds did not originate from the same crystal. Small but significant differences were observed in their red phosphorescence, as the Wittelsbach-Graff’s is slightly longer and more intense. Major differences were noticed during the examination with crossed polarizers and in the luminescence patterns observed with the DiamondView. Nevertheless, their overall resemblance and common origin (India) suggest that both diamonds formed under similar geologic conditions.1

The controversy about “enhancing” an historic diamond or other gemstone, by re-cutting or polishing the stone, rages on. In an article in IDEX magazine titled “From Auction to Outrage,” Laurence Graff is widely criticized by jewelry experts, gemologists and the people of Germany for his re-cut of the historic Wittelsbach diamond.

Renowned diamond cutter Gabriel Tolkowsky is quoted in The Telegraph as saying the re-cut is the “end of culture.” Daniela Mascetti, Sotheby’s jewelry specialist is quoted in The New York Times as saying “The provenance of a gem is important in ways that are not true of other things. With the Wittelsbach blue, you know how it came into existence and in a rather exciting way. You know who has worn it, what kinds of historical events it has gone through and what social upheavals it was present for.”

People of German heritage worldwide are said to consider what was done to the Wittelsbach as vandalism. Dieter Hahn, a leading German diamond cutter, is cited in Abu Dhabi’s The National as saying “This is barbarism. You cannot begin to describe the damage he has done. The stone may look a bit more lively and sparkling, but its history has been destroyed.” Hans Ottomeyer, Director of the German Historical Museum in Berlin reacted to the Wittelsbach’s remodeling stating that it was like “buying a Rembrandt and repainting it.”

Mr. Graff’s response to the controversy in The Telegraph states “I repolished the stone in order to bring out its full potential, bringing to it more life and color, but at the same time making sure that its original features were retained.” There seems to be a difference of opinion in the jewelry, gem and historical communities with Mr. Graff’s decision to alter a piece of history. It will be interesting to see if Mr. Graff’s gamble pays off when, if ever, the renamed Wittelsbach-Graff goes back into the international market. 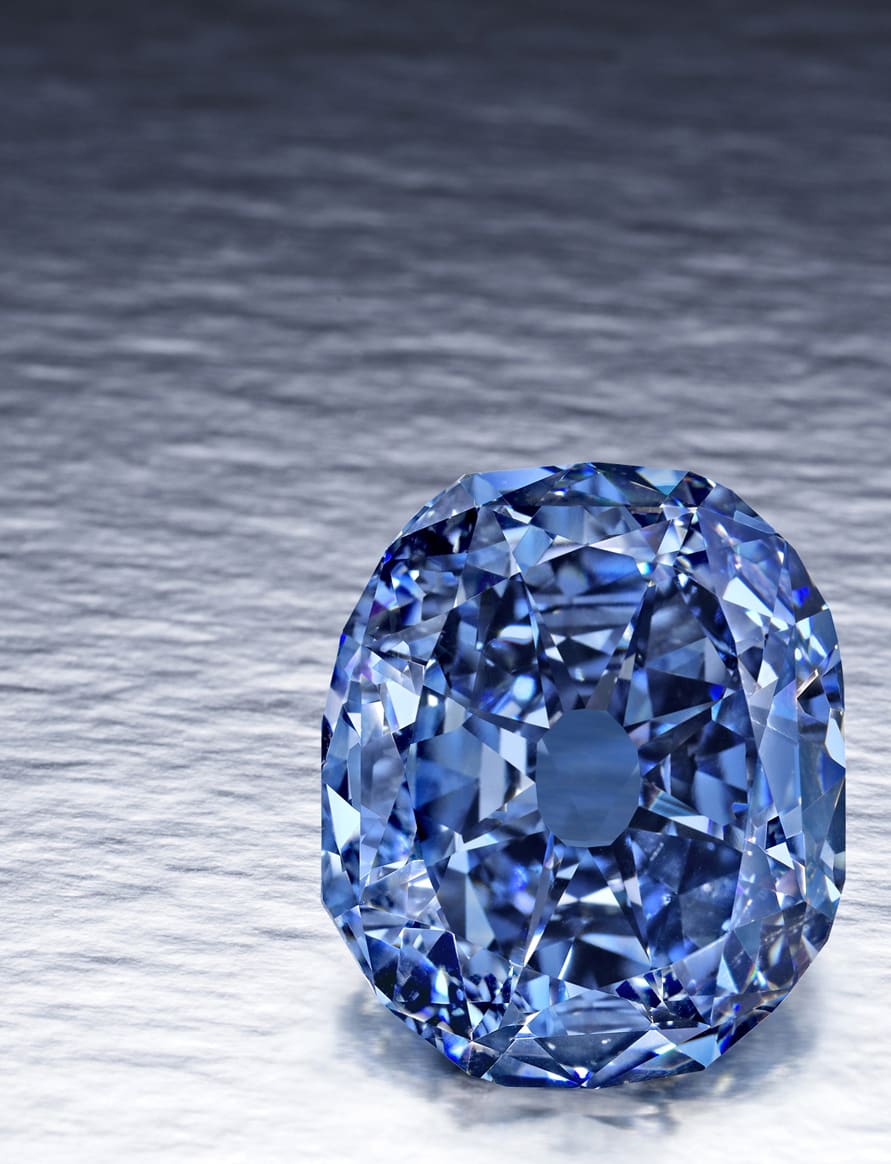 The Wittelsbach-Graff After Recutting

In June 2011 the diamond was likely acquired directly from Graff by the emir of Qatar, Sheikh Hamad bin Chalifa, for a figure in the neighborhood of $80 million US dollars.