Unfortunately, the history of famous diamonds is not without its list of casualties. In this category are those magnificent stones that somehow could not escape the fate of enduring such calamities as an uneducated owner, an untalented or unscrupulous gem cutter, an ill-advised alteration, or a mysterious disappearance, thus depriving the world of experiencing these diamonds in all their original grandeur. Such is the case of the famous Akbar Shah diamond.

Weighing in at a very impressive 116 carats, research leads us to the theory that this diamond was probably one of the eyes set into the famous Peacock Throne created during the peak years of the Mogul Empire. From what is known of Emperor Shah Jehan’s gem inventory, there were three diamonds large enough to be worthy of being the eye: the Akbar Shah, the Shah, and the Jahangir. With one of these stones certainly set in the eye, the others would still have enjoyed a prominent place nearby, either as part of the Shah’s throne, his wardrobe, or perhaps as a decoration on one of the royal “props.” For example, one of these stones was definitely set in a pendant described by Jean-Baptiste Tavernier during his visit to the Mogul royal court in 1665.

It is not often that a diamond comes with its own identification, but that was the case with the Akbar Shah Diamond. Documented as being beautifully engraved on both sides with Arabic characters, the first inscription read, “Shah Akbar, The Shah of the World, 1028 A.H.” This inscription was created as either a commemorative tribute to Akbar Shah, placed on the diamond by his son, Jahangir Shah, following his father’s death, or it simply noted the entry into Jahangir’s (1605-1627) treasury in 1619. The second inscription, “To the Lord of Two Worlds, 1039 A.H., Shah Jehan.”, was a record of Shah Jehan’s (1628-1658) ownership of the stone. When Persia invaded the region in 1739, the Akbar Shah diamond was probably among the stones purloined by Nadir Shah during the looting of Delhi that included the destruction of the Peacock Throne. 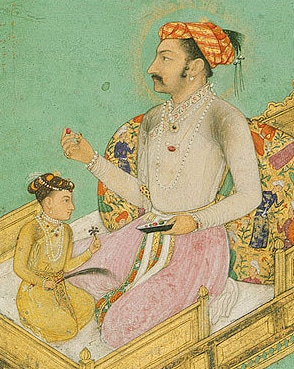 Years would pass before the world would be fortunate enough to again lay eyes on the fabled diamond. Finally, in 1866, the Akbar Shah resurfaced in Constantinople. Now referred to as the “Shepherd’s Stone,” it was purchased by a George Blogg. The record of its weight, the famous inscriptions, and even the name (Nadir Shah had been a shepherd in his youth) leave no doubt that this was the lost Akbar Shah diamond. Unfortunately, its new owner was someone who had little regard for the diamond’s importance as a valuable historic artifact. All Blogg could see was that he owned a very large – and from his perception – unruly sized diamond. Therefore, he commissioned a London cutter named L.M. Auerhaan to re-cut it into a 73.60 carat pear-shape. Besides forever altering its historic shape and size, this action also removed the two unique inscriptions.

With its historical record obliterated, Blogg sold the much lighter, inscription-less, and, historically speaking, less valuable diamond for £35,000 to Mulhar Ray, Gaekwar of Baroda. The stone was then hidden away in his treasury. While it may or may not have changed hands once again, the Akbar Shah diamond has remained concealed from public view.