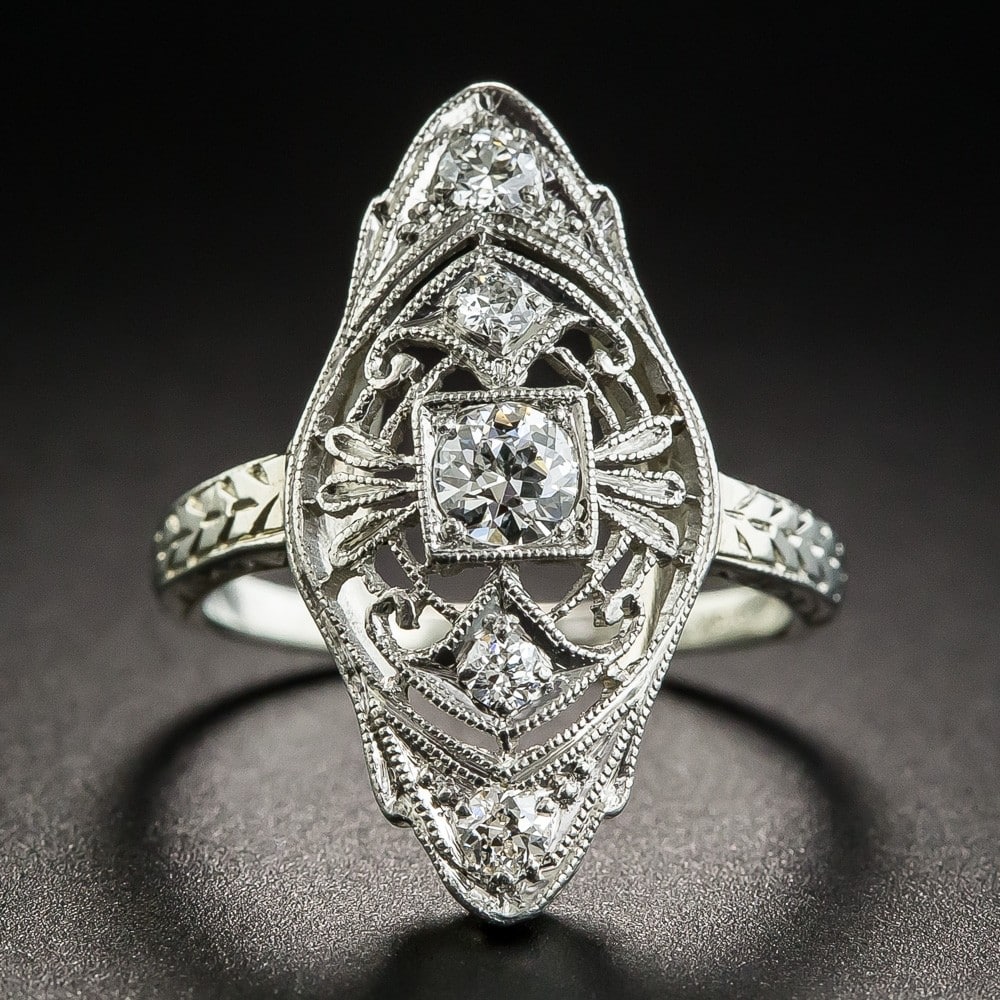 Belais Manufacturing Co., founded by David Belais (1863 – June 5, 1933), was among the early manufacturers of white gold jewelry in the United States. During the late 19th and early 20th century, they experimented with various alloys for white gold as a substitute for platinum in jewelry. David Belais presented his final formula to the trade in 1917. A patent was applied for on October 5, 1918, and granted on February 10, 1920. The formulation specified in Belais’ patent resulted in an 18 karat white gold alloy composed of gold, zinc, and nickel which thus avoided any problems with the platinum restrictions imposed by the war.

The advertising campaign for Belais white gold was so successful that the term Belais became synonymous with white gold. In a November 22, 1922 issue of The Jewelers’ Circular their advertisement claimed they were the “Youngest in Style, Oldest in Skill.” Their slogan, “Belais Made Means Well Made” was used to successfully convince jewelry retailers and the jewelry buying public that Belaiswhite gold was superior to all others. In another The Jewelers’ Circular advertisement, they confidently stated:

If you have had any prejudices against this metal, eradicate them so that you may think and see clearly. You will be then able to visualize the great part that Belais’ White Gold is bound to play in the Jewelry Industry throughout the World. Its future is assured.1

As testament to their success, many prominent jewelers of the time listed in their advertisements the enticement that they sold ’18k Belais.’

Belais was not the first to patent white gold; an alloy of gold, palladium and nickel had been successfully formulated and a patent filed for on April 30, 1913. The patent was granted on December 28, 1915, to Karl Richter of Pforzheim. Richter’s patent was not widely known or produced because of the outbreak of World War I.2 However, challenges to Belais’ patent did begin to appear and David Belais brought suit for patent infringement against Goldsmith Bros. Smelting & Refining Co. in New York District Court on June 8, 1925. The Judge struck down the Belais Patent citing:

I am of the opinion that the patent in suit is invalid for want of invention.3

The Judges did not believe that manipulation of an alloy of gold by varying the ingredients constituted an invention, whether accomplished by Belais or anyone else.

Of particular interest to jewelry historians and appraisers is the opinion handed down by the U.S. Court of Appeals, Second Circuit on March 1, 1926 (by Hough, Circuit Judge) it stated:

The patented alloy has a name; it is called ‘white gold.’ But the name as is substantially admitted, even in the disclosure, is old, and the evidence is clear that for many years white gold has been a well-known alloy used by jewelers. Most of it was ’14 karat,’ a cheaper product, while the alloy at bar is ’18 karat’; but the evidence is also clear that white gold of that grade of fineness was not a novelty when Belais began to work.The facts are that, for reasons accentuated by the World War, but not existent without it, there was a demand for an ‘ersatz’ platinum. The demand had long existed; the war only increased it. Belais produced an alloy, doubtless carefully prepared; he advertised it widely, and has met with very considerable commercial success.4

While the term “many years” is not spelled out explicitly in the Circuit Court’s opinion, we know that at least one patent preceded Belais and we can conclude from this that 1917 may not be as solid a date for the appearance of white gold on the jewelry market as was once thought.

As an interesting aside, David Belais may be better known for his efforts on behalf of animals as the founder in 1904 of the Humane Society of New York. He served without pay as its President until his death. In 1929, he was also instrumental in establishing the first free animal clinic at the Humane Society headquarters.