A metal so rare and special, it takes neutron stars to die twice before it is created. Virtually indestructible, the most malleable of all metals, highly ductile, a great electrical conductor, and extremely resistant to chemical action this is truly unique stuff. The fact that we have access to it is in its own remarkable let alone to have it end up on your finger combined with the best of human artisanship.

When we stack up all the gold we’ve unearthed over history we end up with a cube measuring just 70 feet or 21 meters on each side. Due to its high density, this cube would still weigh more than 190.000 tonnes though but when we consider that less than half of this amount is taken up by jewelry its scarcity becomes apparent.

Gold is usually mixed with silver and copper to increase the volume of the gold and to create an alloy that is suited better to everyday wear. Adding silver and copper makes gold harder so that your jewelry can be worn longer without wearing it down.

A Byzantine coin, the solidus, was divided into 24 Keratia. From this our present-day purity system, the karat standard has been derived. We express the amount of gold present in an alloy into parts of 24. Mind you that these are weight percentages and not volume percentages! This means that 18 karat gold contains 18/24th weight parts pure gold. This can also be expressed as the number ‘750’ which stands for 750/1000 (750 parts out of thousand, or 75%). Pure gold is denoted as being 24 karats. Knowing this you should be able to figure out how many karats a ring is that has 585 stamped in it. Can you? 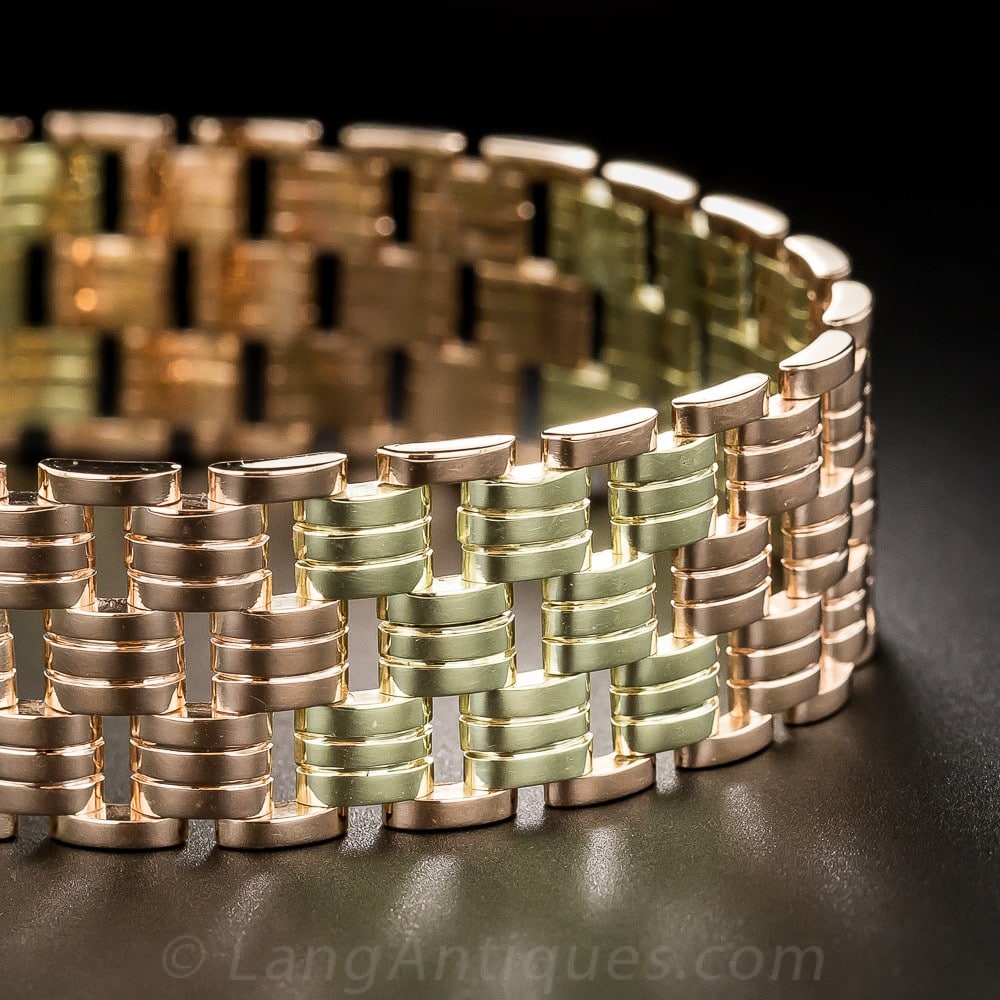 Gold has been produced in a vast number of alloys of all possible compositions. We nowadays encounter alloys like white gold and rose gold, which are produced by adding extra metals in order to color the alloy white or red respectively.

We trace out all the veins of the earth, and yet living upon it, undermined as it is, beneath our feet, are astonished that it should occasionally cleave asunder or tremble: as though, forsooth, these signs could be any other than expressions of the indignation felt by our sacred parent! We penetrate into her entrails, and seek for treasures in the abodes even of the Manes, as though each spot we tread upon were not sufficiently bounteous and fertile for us.1

Thus begins Pliny the Elder (23-79AD) in his book on precious metals. By Roman times gold had been a very precious commodity for millennia. The oldest gold objects ever to be unearthed come from modern-day Bulgaria and were found at burial sites from the ancient Thracian culture (4400BC). Alluvial gold deposits were readily available to the Naqada and Badari cultures in Predynastic Egypt and it was here that around 4000BC gold was used to make jewelry.

Gold’s malleability, color, and luster make it the desirable product it has been since those times. Its density is so high that extracting gold from alluvial deposits is very easily done by simple techniques like panning or sluicing. It is believed sheep skins were used to extract alluvial gold in ancient times; a skin would be placed in a stream and gold-containing dirt poured over it. The sands would wash away and the heavy gold would get stuck in the fleece. Later, around 2500BC, gold began to be extracted from primary deposits by crushing and grinding gold-containing quartz rocks. The ground-up gold dust could be extracted in the same way as alluvial gold.

Although almost never found 100% pure, gold in its natural form can be worked easily. It is the most malleable metal on this planet; a single gram of gold can be hammered into a sheet of one square meter. In the early days of gold working, jewelry would have been produced from gold as it was found. Nuggets would be hammered into sheets on which simple techniques like chasing and repoussé would be applied. Sheets could be cut into shape and rolled into tubes. 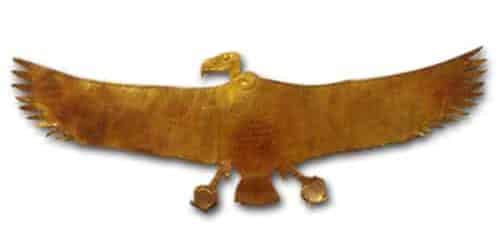 The fact that gold in its natural form can be shaped at will has led to the belief that it was the first metal ever to be used by mankind. Bronze and gold emerge together in history and it is unsure which one beat the other to it. The fact is that bronze is created by a more complicated technique. It has to be extracted by heating copper and tin ore and then cast and beaten into shape. This technique is applicable to gold, so at the time bronze casting techniques were invented and dispersed over the world, gold would have followed this process quickly. The first gold cast objects we know to exist come from the Nile valley from around 2500BC.

As said, natural occurring gold is never pure, it usually is a natural alloy of gold, silver, copper, and various mixes of other metals. By the time gold was melted and cast, extra copper and silver started to be added to change the gold’s color and increase its hardness. The first man-made gold alloys were produced in Egypt. The refining of gold didn’t take place until circa 1500 BC.

In modern-day western Turkey, in Anatolia, the Lydians started to use a silver-gold alloy, electrum to produce the first known coins around 600BC. The use of money spread to the Greeks and later to the Romans. Various alloys were used, depending on time and place.

Although gold is not indigenous to the area, it was in Mesopotamia that the more sophisticated gold working techniques evolved. Gold worked in this area would have been imported from modern-day Turkey, Egypt and maybe even India. Ancient gold working techniques involved simple chasing and repoussé work on hammered sheet gold first and later the successive goldsmiths of Mesopotamia, Egypt, Crete, Greece and Italy added a score of techniques to their repertoire such as wire making, filigree, soldering, granulation, piercing and casting.

Gold’s scarcity in the ancient world caused the goldsmiths of that period to use it sparingly. The amount of gold necessary to create a solid bulky earring can be hammered into sheet gold to produce a great multiple of earrings, which, while being substantially lighter, will look just as solid in appearance. This practice resulted in rather flimsy jewelry. Tubes for rings were often made of rolled sheets and gold wire for filigree was made by twisting thin strips of sheet gold. This gold wire could then be shaped into beaded wire by rolling a double-edged implement over it or turned into a spiraled wire by rolling a single edge over it under an angle. Wire also acted as the basis for the loops that formed chains. To achieve solidity the ancient goldsmiths often used to apply sheet gold onto bronze objects, pressing it into shape with a wooden tool. 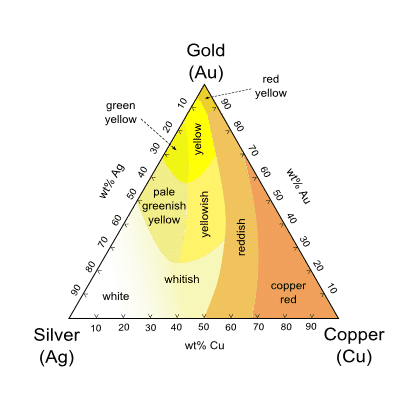 The Colors of Silver, Copper and Gold Alloys in Relation to their Composition. 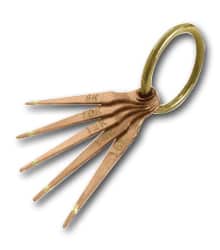 In order to test the authenticity of gold jewelry, the appraiser or jewelry historian has an arsenal of weapons up his sleeve. Let us first consider the gold working techniques mentioned above. Tools leave marks and marks can be seen, sometimes with the aid of magnification. Knowing what techniques were in use when and where, in combination with the ability to recognize their typical appearance, provides the historian with a powerful way of revealing forgeries.

A supposed ancient golden armband is brought to the historian. The band is decorated with filigree work. Knowing that wire drawing wasn’t invented until after Roman times the historian sets to work. His microscope helps him in seeing parallel striations on the wire used to produce the filigree. Since parallel striations are typical for drawn wire and ancient wire was produced by twisting a thin strip of sheet gold which leaves a visible spiraling thread, the historian is thus able to conclude the piece is certainly not pre-Roman.

Besides visual inspection, empiric measurements of gold quality and amounts of present trace elements can be conducted with advanced laboratory equipment. The amounts of certain impurities in ancient gold have been mapped and on some occasions measuring the impurity levels in an ancient piece can provide precious insight into its origin. In most cases, however, its use is limited due to the fact that gold has been recycled since the beginning of its use and will be a mix of several localities.

In order to obtain an idea of a jewelry item’s gold quality, we can use a touchstone or test stone. The item to be tested is filed in an inconspicuous place to reveal the true base metal (this test by itself shows if the item is only plated). A streak of the metal is deposited on the stone by rubbing it against it. Then a golden test needle of a known purity that is expected to lie close to the item’s quality is used to make a second streak. Experts can detect similarities or differences in the way the streaks are looking and can ‘feel’ differences between the two metals during applying the streak.

Next, streaks can be tested for their chemical reaction to aqua regia or a diluted version thereof, depending on the supposed purity of the alloy. The acid is applied to several streaks and their reactions to it observed. The test can be repeated until a matching result is found. A second method is that of staining an inconspicuous place of an item with a solution of stannous chloride, hydrochloric acid, and distilled water in which a sufficient amount of tin is dissolved to form a saturated solution. A small area is scraped away on the object or a small groove is filed. The solution is applied to that area and the effect observed. Different alloys will produce different colors and will tell the expert what alloy he is dealing with.

A more precise method is that of cupellation, where a certain amount of gold is removed from the item. This removed material is weighed and it’s weight recorded. The material is then refined to pure gold (all impurities are removed) and the remaining gold is weighed again. Any weight loss represents the amount of added materials and therefore the purity of the gold can be determined. This method is accurate but has the disadvantage that a (small) portion of the gold has to be removed.

A very nice virtual exhibit about the history of gold is provided by the American Museum of Natural History here.