Although these two diamonds are often spoken about in the same breath, no two stones could be more different – not only in their color and size but, more importantly, in their fates. The larger of these two diamonds literally dodged bullets, surviving a military execution, to later enjoy a long history of multiple owners. The smaller diamond was spared such a volatile history, yet in the end, it could not survive a simple error in its owner’s judgment resulting in its whereabouts remaining unknown to this day. About the only thing these two stones have in common is that they were named after their most famous owner, the ill-fated Archduke Ferdinand Maximilian Joseph.

Even though it is accepted knowledge that the Archduke Ferdinand Maximilian Joseph was of royal blood, there is lingering debate as to who’s royal blood he actually carried in his veins. The popular feeling, fueled by rumors at the time of his birth, believed that Princess Sophia’s suspect son was fathered not by her husband, Franz Karl, but by the ruler of France, Napoleon II. Fueling this belief was the unnaturally high-status Maximilian enjoyed over his siblings. Given the opportunity to train with the Navy, Maximilian showed such an aptitude for it that he quickly ascended in the ranks. By 1857 he had become Viceroy of the Kingdom of Lombardy-Venetia. In July of that same year, he married Princess Charlotte of Belgium (daughter of King Leopold I of Belgium). They lived as Austrian Regents in Milan until 1859 when he was dismissed by his older brother, Franz Joseph I, Emperor of Austria. The couple retired to Trieste, a port Maximilian help to establish while in the Navy.

Later that year, the out-of-work Maximilian was approached by a conservative group of Mexican monarchists with a proposal to assume the throne of Mexico. Still smarting from the confiscation of their land interests by Benito Juarez and his followers, these Mexican monarchists believed the best way to regain their property was to overthrow Juarez and return a monarch, sympathetic to their plight, to power. Though intrigued, Maximilian turned down their proposal, deciding instead to go off on an expedition to South America.

Always interested in the arts and sciences, particularly botany, Maximilian made a botanical trip to study the rainforests in Brazil. It was during this trip in 1860 that he purchased the two diamonds that would bear his name; the Maximilian and the larger Emperor Maximilian. The Maximilian was a 33 carat greenish-yellow cushion that was destined to be worn as a pendant by Princess Charlotte. The Emperor Maximilian weighing in at a boastful 41.94 carats has a cushion-shape with VS1 clarity, I color and displays an unusually strong blue fluorescence. This vivid blue fluorescence is the reason why many accounts record this stone as a blue color diamond. 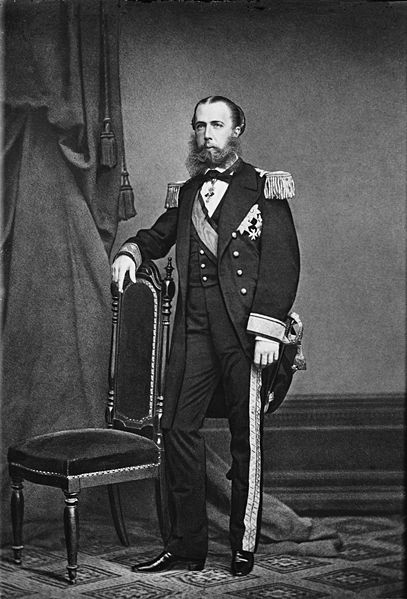 Taking advantage of the United States’ preoccupation with its Civil War, French forces took over Mexico in 1863, forcing Juarez into exile near the Mexican border with Texas. Again, the Mexican monarchists proposed their idea of making Maximilian their emperor, only this time they went directly to Napoleon III. Using the temptation of French glory resulting from the placing of a Catholic prince on the throne of Mexico, they convinced Napoleon III to appoint Maximilian Emperor of Mexico. Not in favor of the idea at all, Maximilian’s brother, Franz Joseph I, Emperor of Austria, tried in vain to convince his sibling to reject the proposal, going so far as to secretly strip Maximilian of his noble rights in Austria for accepting the post. Napoleon III must have been a good salesman for Maximilian accepted the position and, on April 10, 1864, was proclaimed Emperor of Mexico. The newly appointed Mexican Emperor, his wife, Charlotte, and his two diamonds arrived in Mexico in May of 1864 to assume the throne. 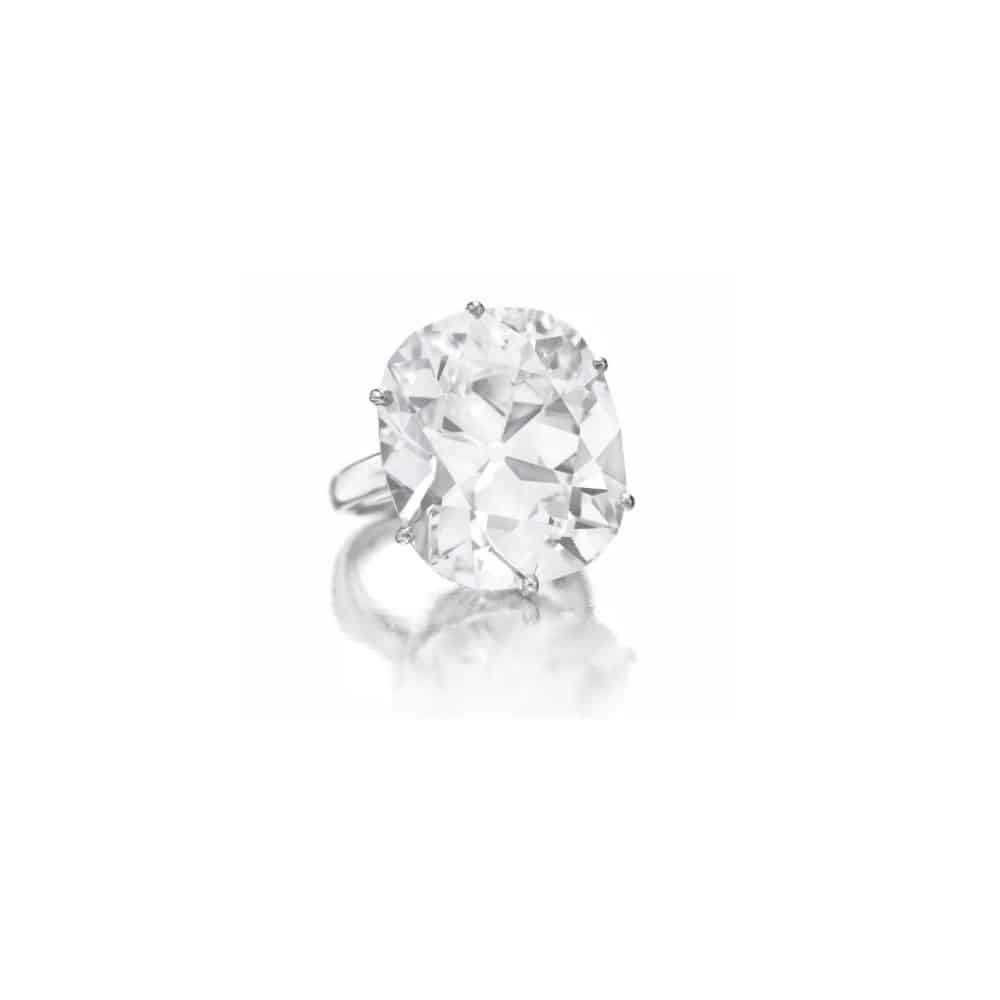 It did not take long for the Maximilian government to become very unpopular. Much to the monarchists’ chagrin, they quickly discovered that Maximilian had more in common with Juarez and his liberal followers than he did with them. Upholding the land reforms put into place by Juarez, Maximilian succeeded in not only angering the monarchists who put him in power, but also the Catholic Church for refusing to restore their land interests as well. These actions did little to sway Juarez, who still wanted Maximilian gone. With his support eroding on all sides, Maximilian then compounded his problems with the unpopular decision to invite displaced Confederates soldiers and their families from the recently concluded American Civil War to immigrate to Mexico. (This was the topic of the 1969 movie “The Undefeated” starring John Wayne and Rock Hudson.)

Meanwhile, with the Civil War over and the country back intact, the United States government finally began paying closer attention to what was happening in Mexico. Not liking French involvement so close to its border, the United States began massing troops on the Mexican border while demanding France withdraw its forces. Mounting pressure at home to end France’s involvement in Mexico coupled with the pressure from the United States was enough motivation to make Napoleon III agree to remove the French forces within 18 months. Abdicating by proclamation in October of 1866 Maximilian somehow allowed his dwindling group of supporters to talk him into remaining in Mexico. It would be a fatal decision. His wife, perhaps under so such illusions, returned to Europe. However, being the dutiful wife, she attempted to enlist aid for her husband’s failed regime. Unsuccessful in her efforts, she suffered a breakdown. Mental illness would remain her companion until her death in 1927.

With his window of opportunity to flee the country gone, Maximilian was captured in May of 1867. In spite of opposition by foreign governments demanding his exile to Europe, Maximilian was court-martialed and sentenced to death. Legend has it that during his execution he wore the Emperor Maximilian diamond in a pouch suspended from his neck. Unfortunately, wearing the diamond did little to impress the firing squad and he was executed on June 19, 1867. After his death, the newly formed Mexican government returned Maximilian’s body to his family in Vienna and the Emperor Maximilian diamond to his distraught, unbalanced widow. Charlotte would keep the diamond until 1919 when it was sold to a Chicago diamond dealer named Ferdinand Hotz to cover payment of her medical bills.

The Emperor Maximilian diamond would make an appearance at the “Century of Progress” exhibition in Chicago in 1933-34 and remained in the possession of Hotz until his death in 1946. Following Hotz’s death, it was sold to an unnamed private individual who had it mounted by Cartier in a ring. On July 20, 1982 it was sold again, this time by Christie’s in New York with a catalog description of “…property of a lady, sold by order of the Trustees.” The auction estimate was $330,000 but the price realized was $726,000, more than double the original estimate. Laurence Graff, famed London jeweler and diamond collector was the winning bidder at that auction. In 1983 Graf made diamond sales history for a single transaction when he sold this diamond to an unnamed buyer in a lot along with the Idol’s Eye and the Sultan Abd al-Hamid II. The rumored purchasers were Ferdinand and Imelda Marcos of the Philippines.

The smaller Maximilian diamond, left behind in Mexico by Charlotte upon her return to Europe, resurfaced in 1901 when it was recovered by U.S. customs officials searching two Mexican smugglers at the border. The U.S. government auctioned the diamond for a price of $120,000 to Congressman Levy. The Congressman later sold it to a New York Jeweler named William R. Phelps who, in turn, sold it in 1964 to Morris S. Nelkin, another New York Jeweler. Sadly, it was hidden in a trash can by a family member during a suspected robbery at Nelkin’s home and summarily disposed of by the local garbage collectors to the city dump. Even after an exhaustive search, the Maximilian still remains at large to this day.