Thievery, royalty, revolution, gambling, eccentricity, mystery and curses are all part of the spectacular and storied past that is the famous – and infamous – Hope Diamond. Weighing in at 45.52 carats, this type IIb, dark blue stone’s condition is reportedly flawless. Contributing to the awesome beauty is its unusual red phosphorescence. Surrounding this gem legend is a pendant containing 16 impressive pear and cushion-shaped colorless diamonds. An additional 45 colorless diamonds are part of its chain.

The Hope Diamond’s interesting and diverse history is believed, to begin with, Jean Baptiste Tavernier, a French merchant, and traveler, who purchased a 112 3/16 carat diamond probably from the Kollar mine in Golconda, India. Triangular in shape and having a crude cut, its beauty was evident even then as Tavernier described its color as a “beautiful violet”. How Tavernier obtained the diamond is somewhat murky. One legend has him stealing the diamond from a mounting as the eye of an Indian idol. Later, the diamond obtains royalty status when it is sold to King Louis XIV of France in 1668. King Louis’s court jeweler, Sieur Pitau, re-cut the diamond in 1673 and the result was a 67 1/8 carat stone. At this time the color was described as intense steely-blue. Making it part of his official wardrobe, King Louis XIV wore the stone in a gold setting suspended from a neck ribbon for ceremonial occasions. It became known as the “Blue Diamond of the Crown” or the “French Blue”. 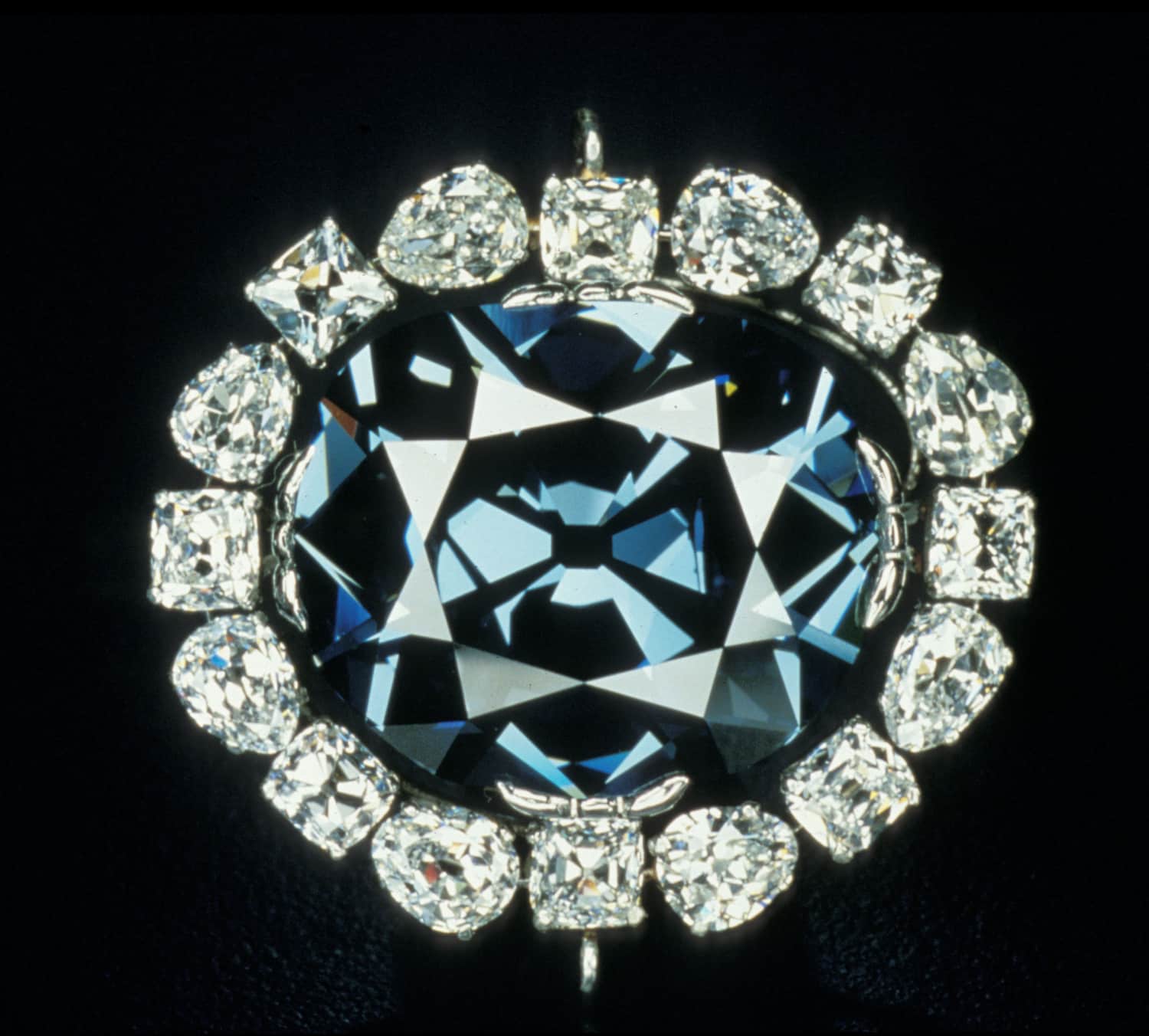 The Hope diamond.
Image Courtesy of The Smithsonian Institute.

In 1749 the stone was reset by King Louis XV by court jeweler Andre Jacquemin into a piece of jewelry for the Order of the Golden Fleece. During the reign of Louis the XVI all the jewels of the French Royal Treasury were turned over to the government. However, the diamond did not remain French government property for long as in September of 1792 it was stolen by looters during the upheaval of the French Revolution. 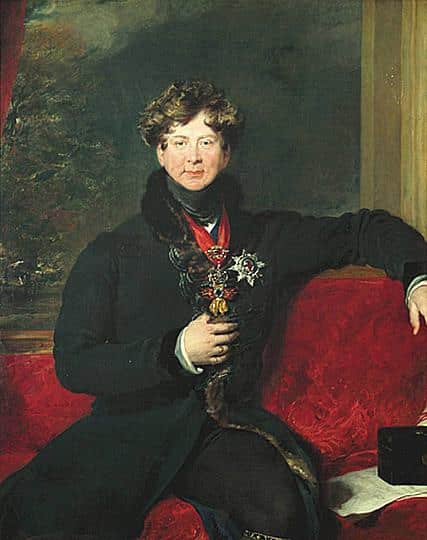 Portrait of George IV. of the United Kingdom Date: c 1810

It is in 1812 London that the famous diamond resurfaces. A diamond merchant, Daniel Eliason, was reportedly in possession of a deep blue diamond that evidence suggests was the re-cut “French Blue”. Somehow the stone again found its way to a royal family, becoming the property of King George IV of England. Upon King George IV’s death in 1830, the stone was sold to resolve his debts.

More mystery surrounds the Hope diamond as there is no recorded history of where or from whom, in 1830, the next owner, Henry Philip Hope, acquired it. It is during Henry’s ownership that the famous gem acquires its name, taking the last name of its owner – Hope. By 1839 the stone passes to Henry Thomas Hope, the original Hope’s nephew. In 1887 the stone finds itself bequeathed to Francis Pelham Clinton with the condition that he change his name to Hope and never sell the diamond. Now known as Lord Francis Hope, the former Francis Pelham Clinton’s vice in life was gambling. After years of finding himself on the losing end of most his bets, Lord Hope found himself bankrupt and turned to the one asset he had remaining to relieve his debt situation. It took years of legal wrangling, but Lord Hope finally succeeded in obtaining permission to sell the diamond in 1901. From this point, the diamond found itself with new owners many times in the next 10 years. They included a New York dealer, a Turkish diplomat, a French diamond expert and finally a French jeweler, Pierre Cartier. 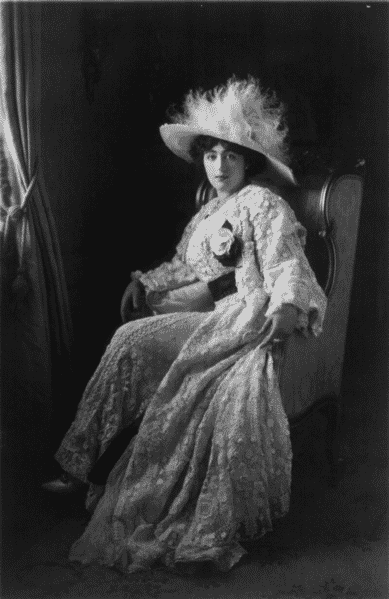 In 1910 Mrs. Evalyn Walsh McLean was shown the diamond at Cartier in Paris but she rejected the mounting. Not taking no for an answer, Cartier re-set the stone and took it to Mrs. McLean in the United States. It is believed that the “Hope curse” may have originated with Cartier or a salesperson with Cartier in order to further gain Mrs. McLean’s attention. Cartier left the Hope Diamond with her for the weekend and in 1911 she purchased the stone. The Hope Diamond’s most eccentric owner, Mrs. Mclean had the stone mounted as a headpiece and later as a pendant from which she would suspend the McLean Diamond, 31.26 carats, and the Star of the East, 94.8 carats.

Mrs. McLean’s sense of humor resulted in the stone being worn by her Great Dane, Mike. Soldiers in the hospital played catch with it and she loaned it to friends on several occasions. Mrs. McLean never considered the stone unlucky even though her own life was full of tragedy. Her nine-year-old son was struck by a car and killed. Her husband divorced her and died insane and her daughter committed suicide. Mrs. McLean herself became a morphine addict. Two years after her death in 1947 the Hope Diamond, along with her entire jewelry collection, was purchased by Harry Winston. Harry Winston, Inc. sent the stone on a charity money raising tour for a period of about 10 years.

On November 10, 1958, Harry Winston donated the Hope Diamond to the Smithsonian Institution, shipping it to them unceremoniously in a brown paper bag through the U.S. postal service! Since being donated to the Smithsonian, the Hope Diamond has traveled little, being displayed outside its current home only four times; at the Louvre in Paris for a French Jewelry exhibit, in South Africa for the Rand Easter Show in Johannesburg, at Harry Winston in New York for their 50th anniversary gala and back to Harry Winston in 1996 for some cleaning and restoration. It can be observed today at the Smithsonian as one of the museum’s star attractions. 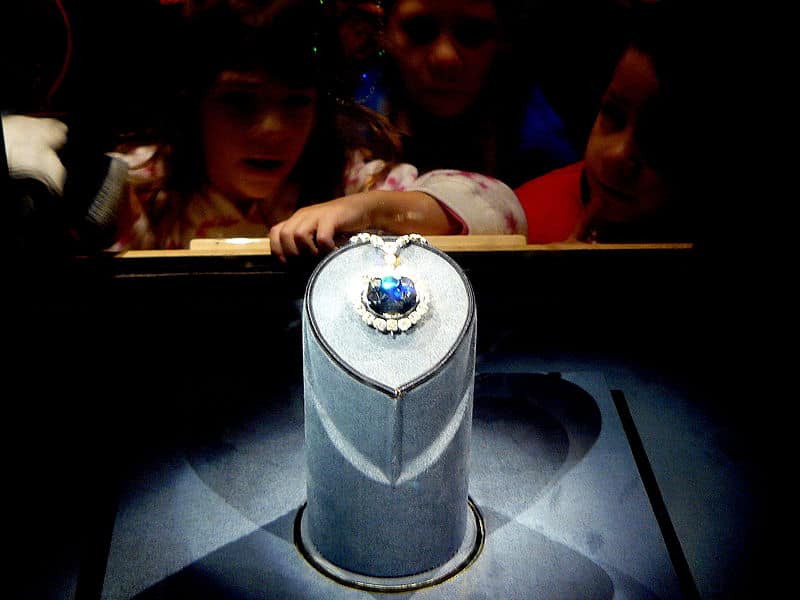 The Hope On Display at the Smithsonian.

It was reported by the Associated Press on September 23, 2009 that the Hope Diamond will be displayed without its setting for several months while the esteemed firm of Harry Winston creates a new mounting for this magnificent gem. Leading with the headline

the story announces that a new setting, titled “Embracing Hope,” is being crafted in celebration of the diamond’s 50th anniversary at the Smithsonian. The diamond will return to its original historic setting late in 2010.

In a once-in-a-lifetime opportunity, the Wittelsbach-Graff and Hope diamonds will be on display together at the Smithsonian Institute from January 28, 2010 until August 1, 2010. Never before have two such amazing blue diamonds been exhibited together. While the Wittelsbach-Graff is at the Smithsonian, scientists will endeavor to discover whether these extremely rare blue diamonds originate, as has been rumored over the years, from the same mine in India. This is a question that has intrigued gem lovers for centuries.

Despite their uncanny similarities in history, color, and phosphorescence, our study clearly shows that the Wittelsbach-Graff and Hope diamonds did not originate from the same crystal. Small but significant differences were observed in their red phosphorescence, as the Wittelsbach-Graff’s is slightly longer and more intense. Major differences were noticed during the examination with crossed polarizers and in the luminescence patterns observed with the DiamondView. Nevertheless, their overall resemblance and common origin (India) suggest that both diamonds formed under similar geologic conditions2

There are two types of boron isotopes and the heavier isotope originates in the seafloor, the lighter from the earth’s mantle. It was not possible to spend the time figuring out which boron isotopes were present. Whether or not this has an impact on blue diamonds remains a mystery until further studies can be conducted.

Interestingly enough, the scientists had to work at night so that the Hope could be displayed to the public in the daytime. A jeweler unmounted the diamond each evening in order that the tests could be conducted. The gem was remounted for display before the Smithsonian opened each morning.