This particular stone could be the reason for the cliché “diamond in the rough.” During its early history, this stone gains a reputation of underwhelming its observers – especially for a diamond of its impressive size. This disappointment in its beauty plagues the diamond until its fortunate enough to fall into the hands of an owner with the foresight to sacrifice some of its weight in return for unleashing its hidden brilliance. With its successful re-cutting the perception toward this stone changes dramatically. Later, the stone is reduced in size twice more, each time improving upon its beauty and making it one of the world’s most coveted gems. Such is the story of the Nassak diamond.

Like many of the diamonds in this time period, the Nassak is said to have begun its journey from India where it served as the eye in a statue of Siva. When the British concluded its Maratha Wars in 1818, records show a large triangular-shaped diamond among the spoils carried away by the British army. Colonel Briggs of the British Forces hands over the loot to the Governor-General and Commander-in-Chief, the Marquess of Hastings. Being an honorable man and forgoing personal profit, he dubs the diamond the “Nassak” and presents it to the East India Company. Taking possession of the Nassak, the East India Company sends it, along with other items seized during the war, to England.

a diamond of great purity, but of bad form.1

its form is triangular, and it is cut and polished, so as to retain the greatest possible weight. But it exhibits none of the qualities which it would so proudly display, if it had been well proportioned.1

As a result, Rundell and Bridge, jewelers to the Crown, decide to re-cut the diamond, preserving the original shape, but increasing its brilliance, and therefore its value, and netting a loss of only 10%. 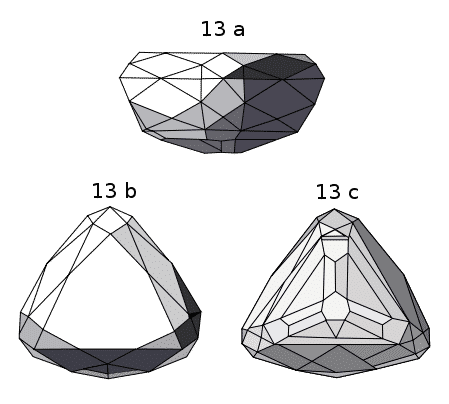 After cutting, the diamond is sold at a much-depressed price, to the Emanuel Brothers who auctioned it off six years later in a sale held at Willis’s Rooms. The Marquess of Westminster decides to purchase the Nassak – but only after the Arcots and the Hastings diamonds were thrown into the deal. Mounting the Nassak diamond into the hilt of his sword, the Marquess wears the weapon on the occasion of Queen Victoria’s 18th birthday, which he attends alone as his wife is indisposed. The Marchioness nonetheless receives the Arcots, intended for her to wear on that occasion, as a birthday gift from her husband.

In 1926 the Nassak is sold to the famous Parisian jeweler George Mauboussin, who in turn sends the stone to the United States, listing the diamond for customs purposes as an “artistic antique” even though the diamond is actually for sale. He was successful in his ploy until it was discovered by members of the jewelry trade. Uproar ensues; the jewelers demand that Mauboussin’s ruse be identified for what was truly was – an attempt to avoid duty fees by circumventing existing customs laws. The Court of Customs agrees with the jewelers, reverses its earlier ruling, and collects their duty from Mauboussin.

By 1933 the Nassak diamond is placed in a pearl necklace by Cartier of London. Later, in 1937, the stone is again re-cut, this time to a 47.41 carat rectangular stone and sold to Harry Winston. Winston decides to reduce the stone even further – to 43.38 carats – and then sells it to Trabert & Hoeffer in New York.

The diamond eventually becomes the property of Mrs. Leeds of New York, who wears the diamond in a ring. The year 1970 finds the diamond again being auctioned, this time at Parke-Bernet; the hammer comes down at $500,000 to a Mrs. Hand of Greenwich. The record-setting price realized for this sale was second only to the sale of the Taylor-Burton diamond the prior year. In 1977 new owners, the partnership of J.& S.S. DeYoung and Bulgari sells the diamond, now graded ‘D’ Flawless by the Gemological Institute of America, to the King of Saudi Arabia. It has since been sold to Robert Mouawad.