Silver is a white metallic element, harder than gold, softer than copper and second only to gold in malleability and ductility. Represented on the Periodic Table of the Elements by the symbol Ag, silver is an excellent conductor of heat and electricity. Silver is considered one of the noble metals because of it is excellent resistance to oxidation. Historically, silver has played a prominent role in the production of jewelry an objets d’art and is usually alloyed with another metal to harden it enough to maintain the desired shape and details imparted to it.

At times throughout history silver was valued more highly than gold. When you examine the quantities of silver used in jewelry, its use outweighs all other precious metals by a large factor. This versatile white metal also triggered far more technological advances in the field of mining and metallurgy than it’s other precious metallic cousins. Entire economies have depended on its availability and the access to silver deposits has swung wars and as a result history.

Two or more elemental metals mixed to form a homogeneous mass are an alloy. Sometimes metals are alloyed with a non-metal such as carbon. The newly formed metal is usually harder, more durable, a different color and less malleable than the original components. Precious metal alloys remain precious as long as the precious metal dominates the mix and it is kept in certain proportions.

.800 silver is an alloy of silver that is 800 parts silver and 200 parts other metals. It is also referred to as International Coin Silver. This alloy was common in the 19th and early 20th centuries on the European mainland but was not used in jewelry in the United States. 800 silver was the alloy of choice for pieces decorated with niello because it can withstand high firing temperatures better than alloys with a higher silver content.

Between 1687 and 1720 Britannia silver was marked with a woman’s figure (Britannia) and a lion’s head erased. Since 1999 Britannia silver has been marked with the fineness hallmark 958 inside and oval. The symbol of Britannia became optional. The Royal Mint has issued “Britannias” since 1998, a silver bullion coin, containing one troy ounce of silver, minted in Britannia standard silver.

A 90 percent fine silver content was the standard set in the United States of America for silver coins until 1966. Now no silver is used in U.S. coins. Other international coin silver standards range to an 80 percent silver content. The trend is to replace silver with nickel and aluminum in most countries’ currencies.

Fine silver is another way of saying pure silver.

Precium is a brand name for an alloy of silver and palladium. It was developed by Handy & Harman in New York and patented on April 9, 1974. It has an antique white color with a precious metal content of greater than 87% and is also tarnish resistant and very heavy in weight.

Sterling is an alloy of silver that is .925 parts fine silver and .075 parts other, usually copper. The term is also used to denote flatware made of sterling silver.

Styptor is an alloy of pewter and silver. It was used during the late 1930s and 1940s primarily in the manufacture of minaudières when precious metals were in scarce supply. Frequently pieces manufactured with styptor had accents of yellow gold and gemstones.

Back to Silver Alloys     Back to Top 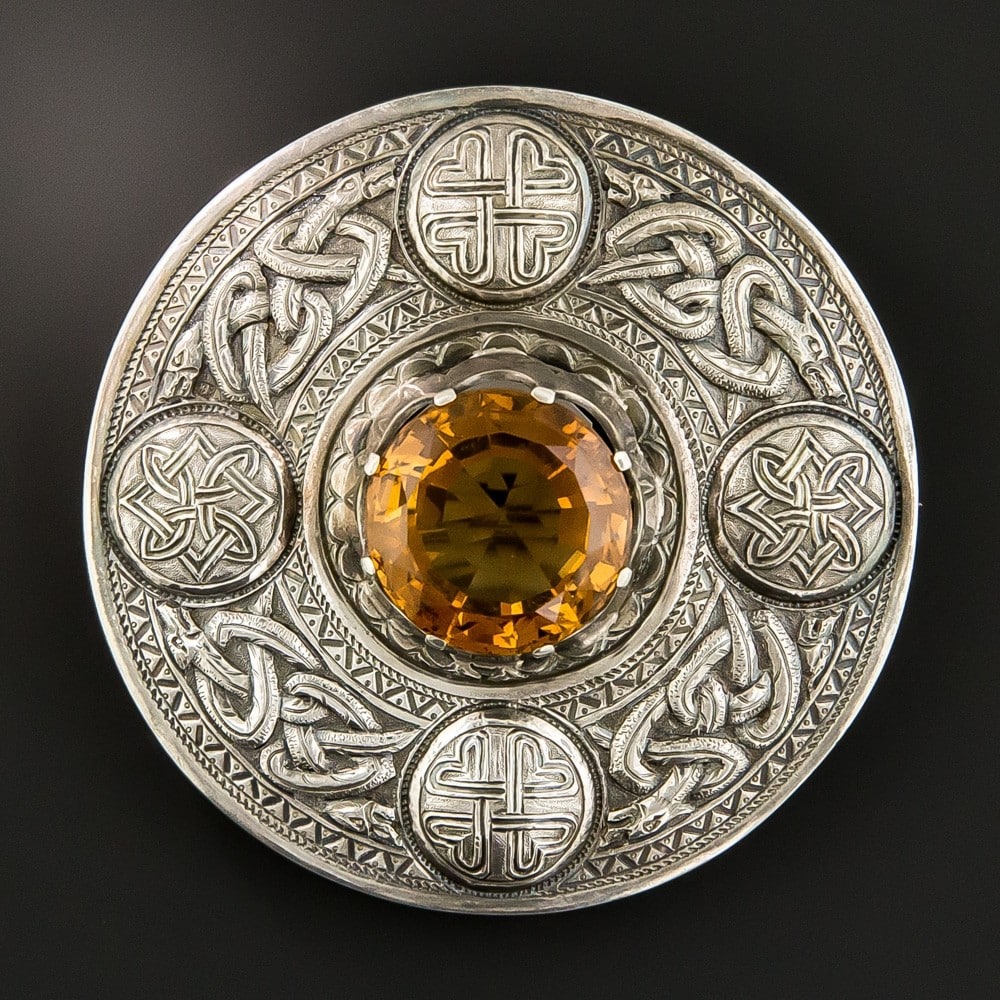 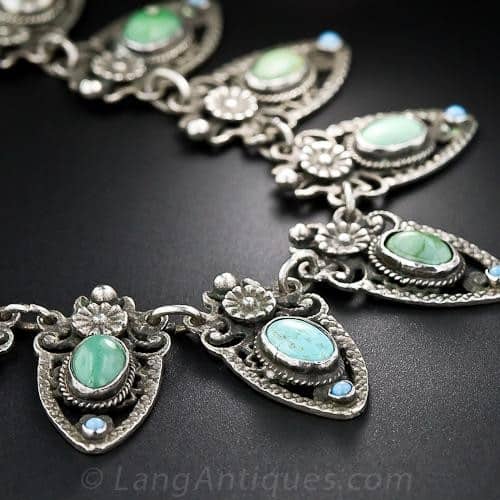 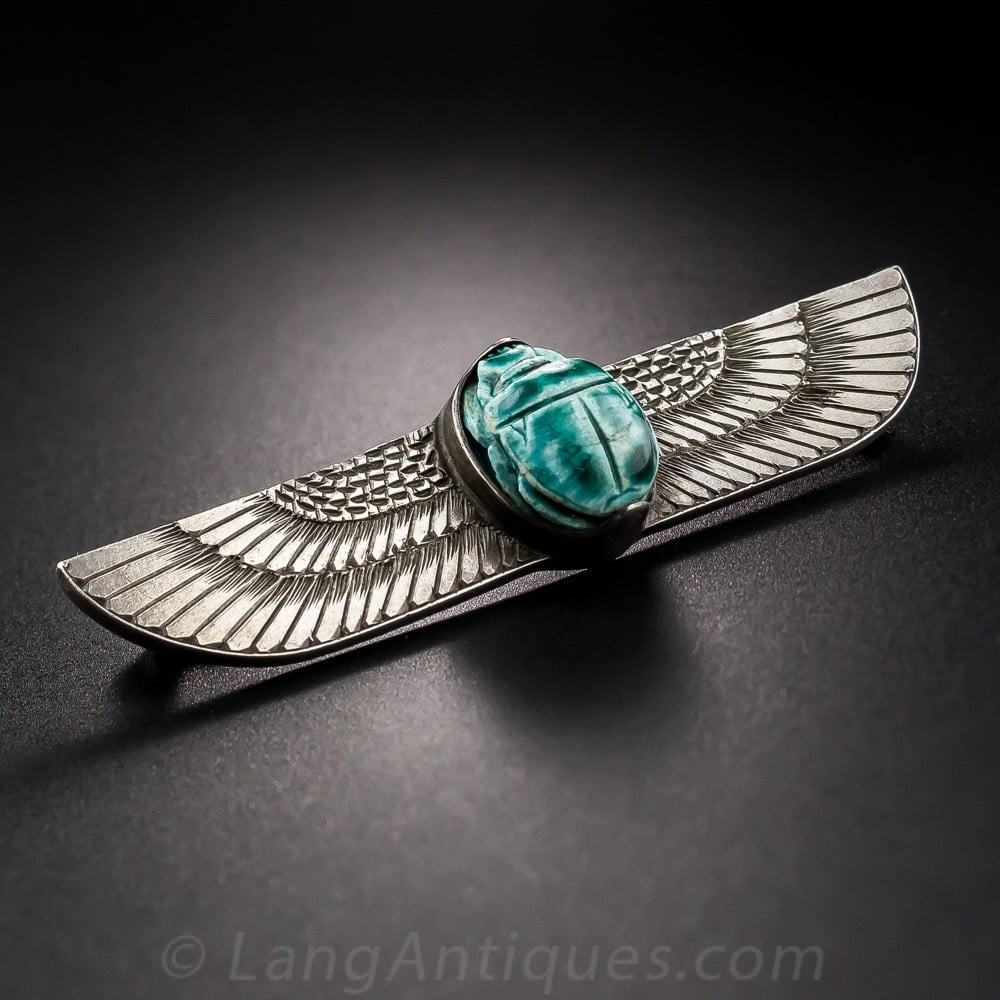 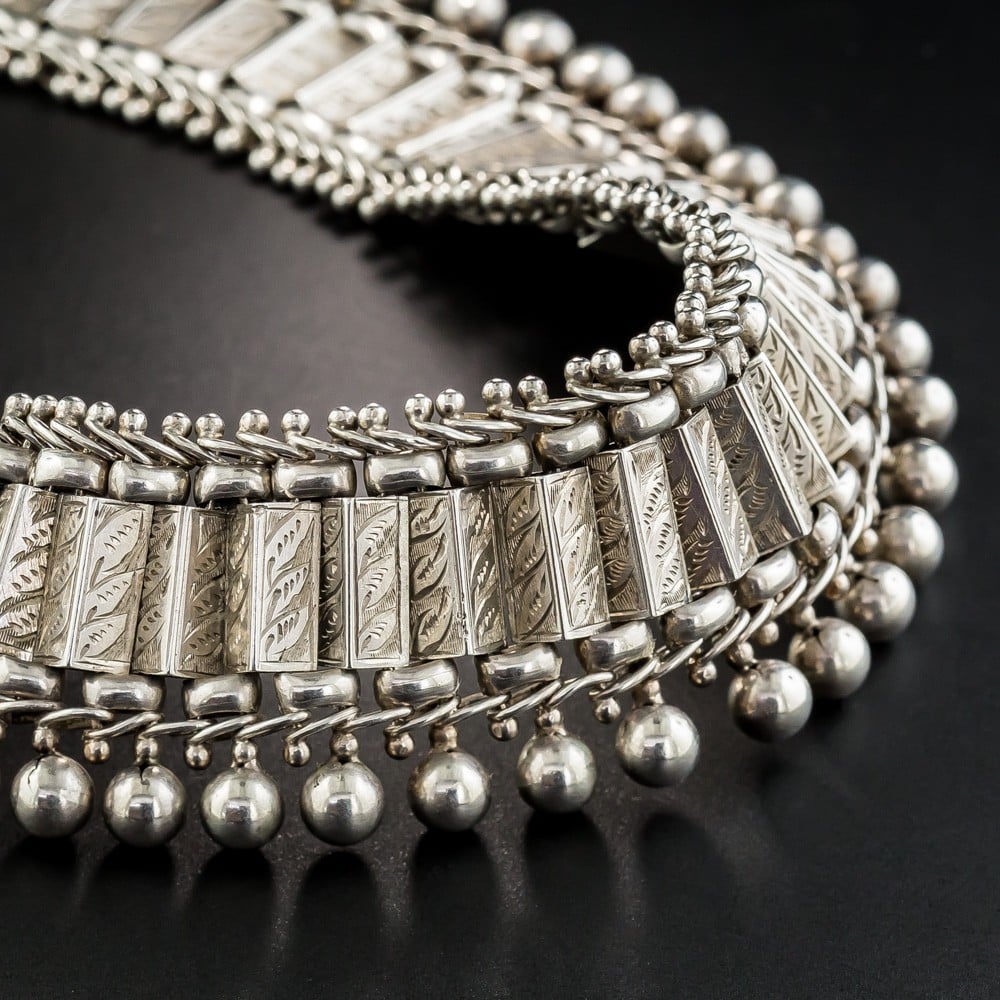 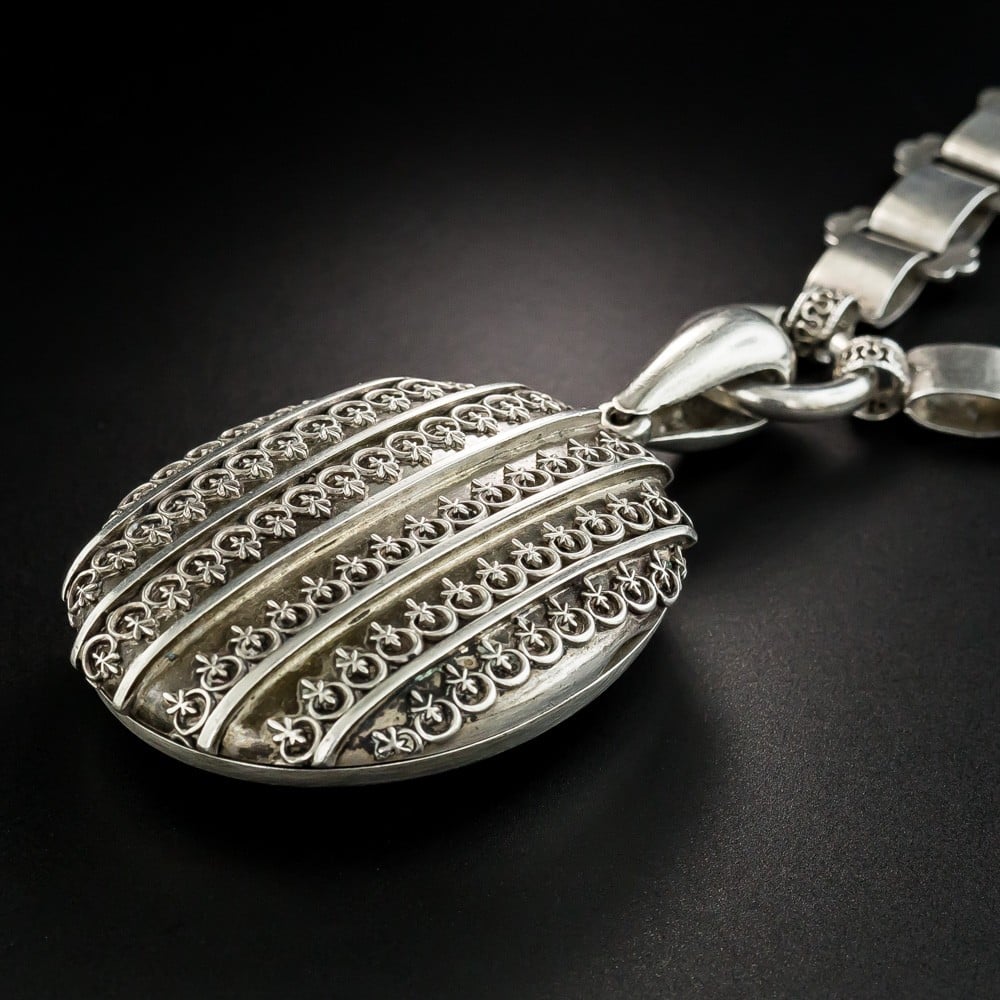 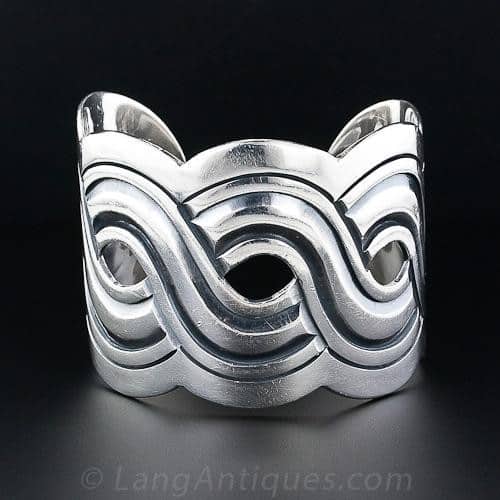 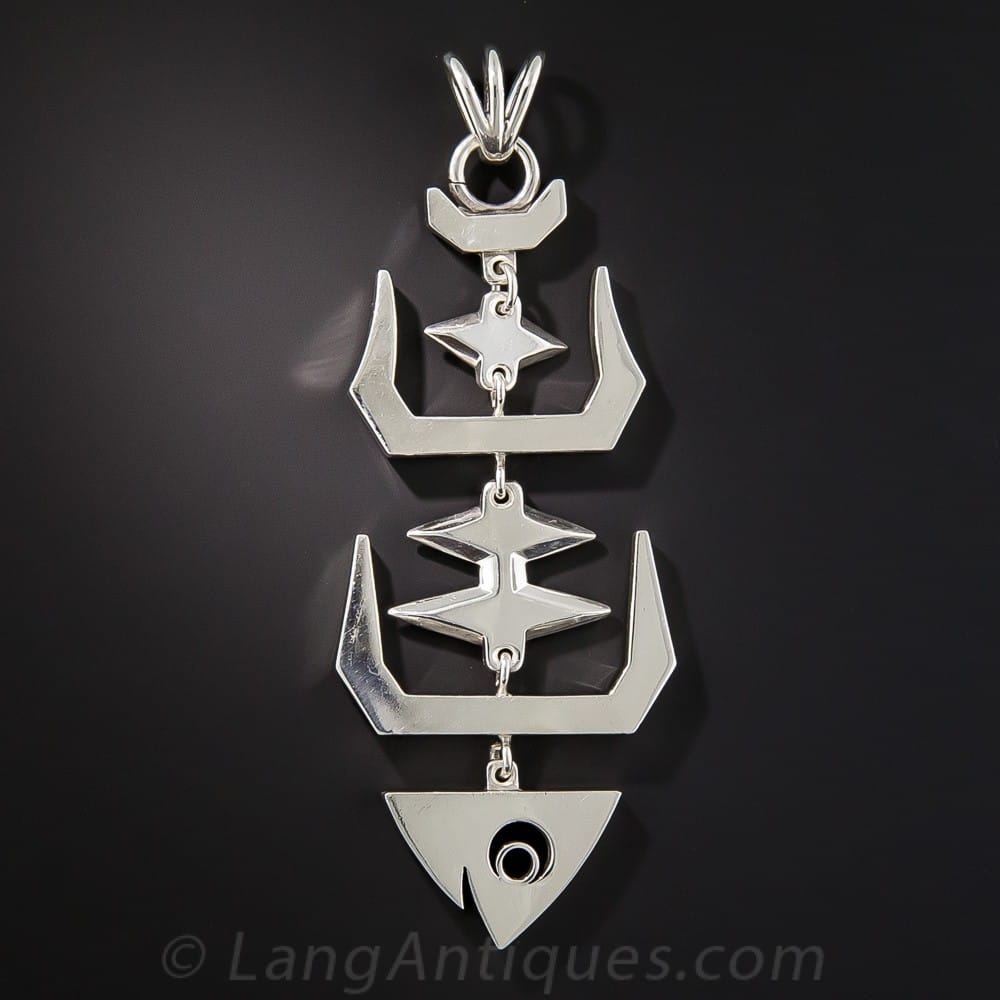 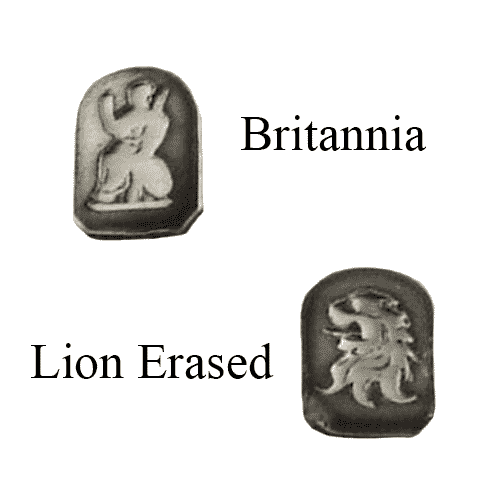 Ruolz was a name given to some silver-plated metals. In 1841 a chemist named Ruolz discovered a way to gild or silver plate objects using silver or gold dissolved in cyanide of potassium. The term is sometimes used to describe an alloy of silver also discovered by Ruolz.

Silver-filled indicates a plating of silver not less than .925 that is applied by soldering, brazing, welding or other mechanical means. This plating must comprise at least 1/20th of the entire article.

Silver-topped gold was an innovation by English jeweler James Cox, c. 1767 – the middle of the Georgian Era – which allowed silver to be backed by gold. Prior to this, gems being set in white metal were set in silver only. If the jewelry was not cleaned constantly, silver tarnish, rubbing directly onto skin, could leave marks or stain fabric. Gold does not oxidize and therefore leaves no discoloration on skin or clothing. Since the use of white metal was desirable for gem mounting, silver remained in use for jewelry with the addition of the gold backing. This process continued to be popular until the late eighteenth century. As the technology was developed to make it possible to use platinum in jewelry, it too was added to the top of yellow gold in the same manner as silver. Eventually, the gold backing was eliminated and jewelry made purely of platinum took its place.

Silverplate results when a base metal article is electroplated with fine silver. The base metal is usually nickel, copper, or brass.

Vermeil refers to a heavy plating of karat gold over sterling silver. Historically it was a chemical coloring applied to mercury-gilded objects to produce a red or yellow color.

From the FTC guides:

An industry product may be described or marked as “vermeil” if it consists of a base of sterling silver coated or plated on all significant surfaces with gold, or gold alloy of not less than 10 karat fineness, that is of substantial thickness and a minimum thickness throughout equivalent to two and one half (2 1/2) microns (or approximately 100/1,000,000ths of an inch) of fine gold.

Back to Plated     Back to Top 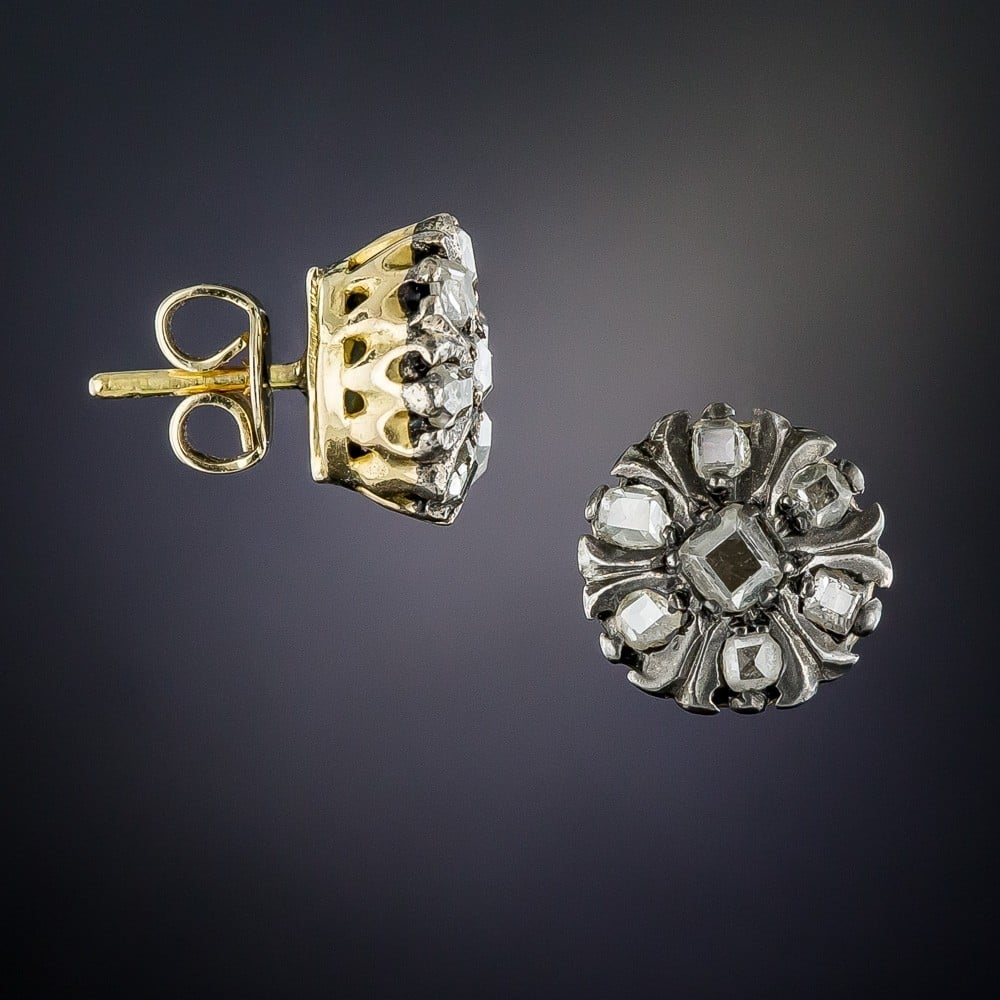 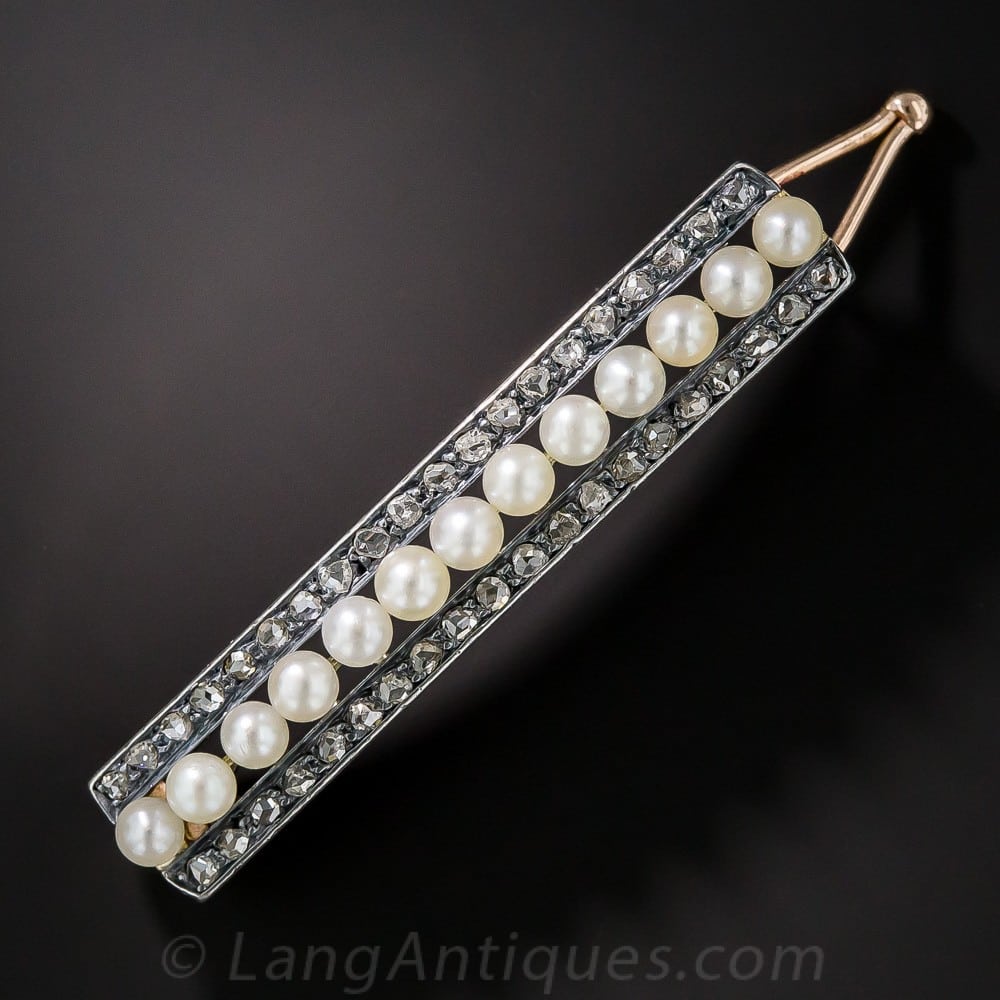 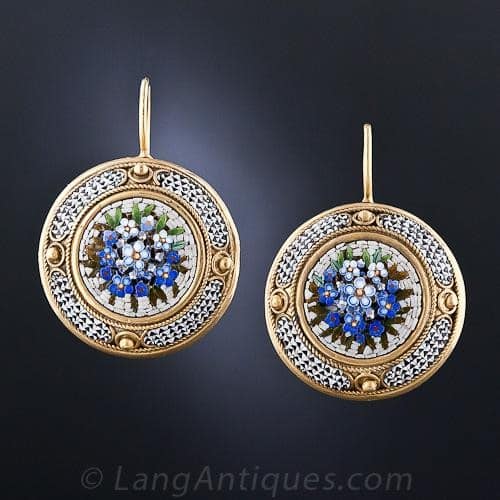 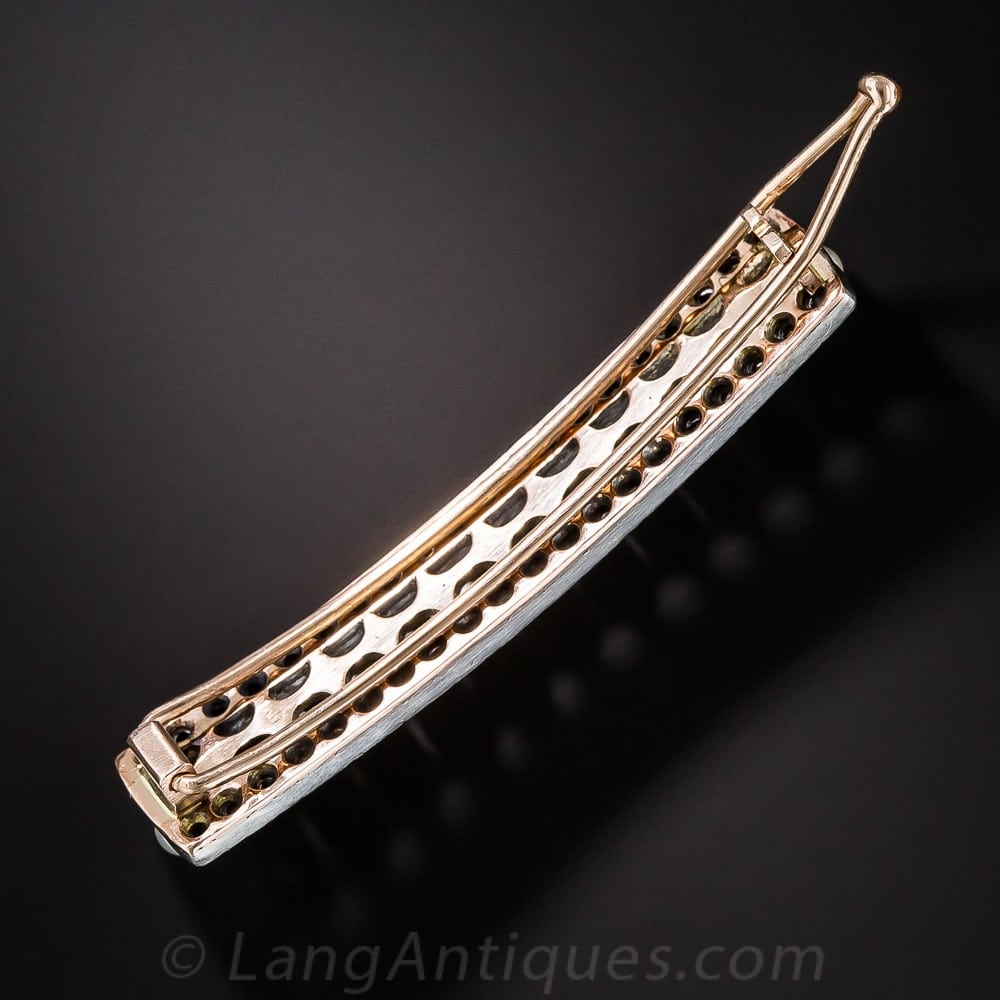 German silver is a misnomer for silver used to describe a metal that looks like silver but is actually an alloy of copper, nickel and tin, zinc, or other metals. German silver is also known as nickel silver or alpaca.

Hotel silver is the name given to white metals that resemble silver but do not contain any precious metals. These are mostly used as cutlery.

Nickel silver is also called German silver because of its white color. This metal looks like silver but it does not contain any silver. Nickel silver is an alloy of copper, nickel, and zinc and sometimes contains trace amounts of tin, lead or other metal.

Tula silver is an alternate name for niello, named after the Russian town Tula where many of the 19th and early 20th-century niello works were crafted. 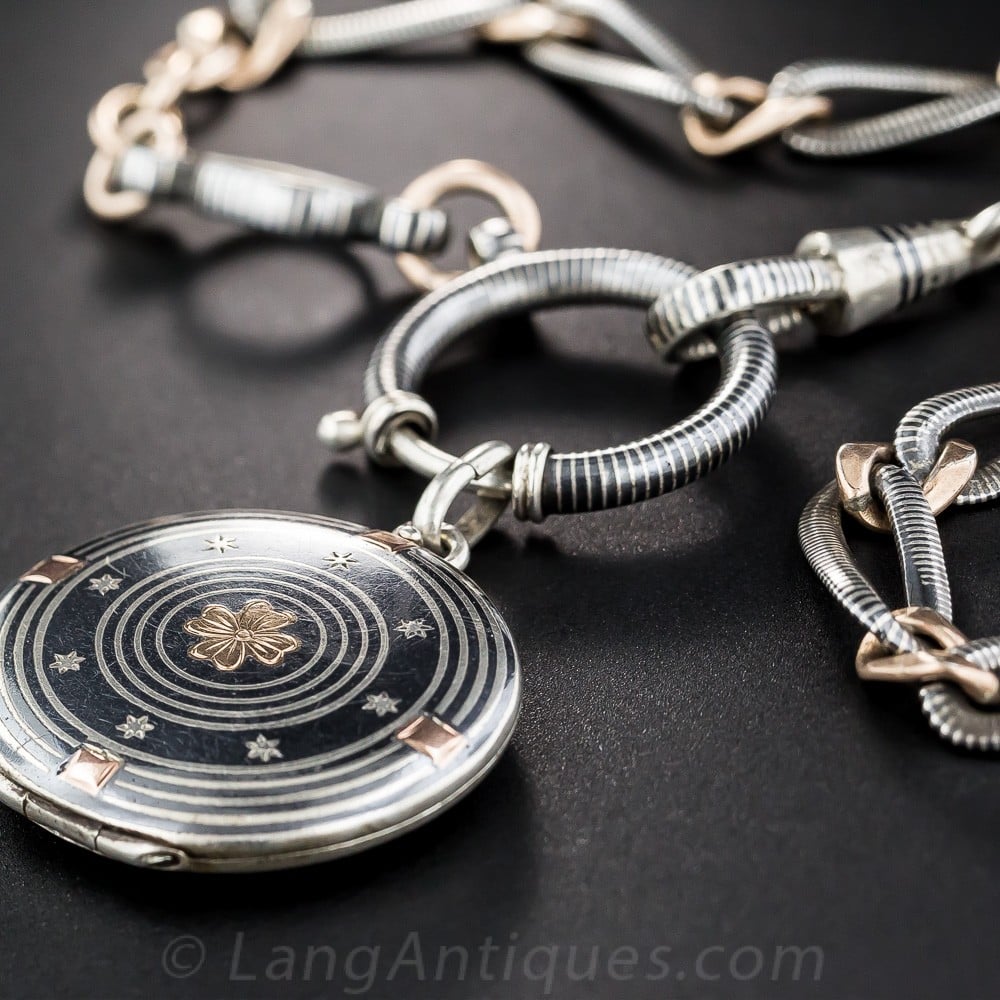 Bright sterling is sterling silver polished to a mirror-like finish.

Liquid silver is the term for highly polished sterling silver tubular beads. When these beads are strung together in quantity they seem to flow like liquid. 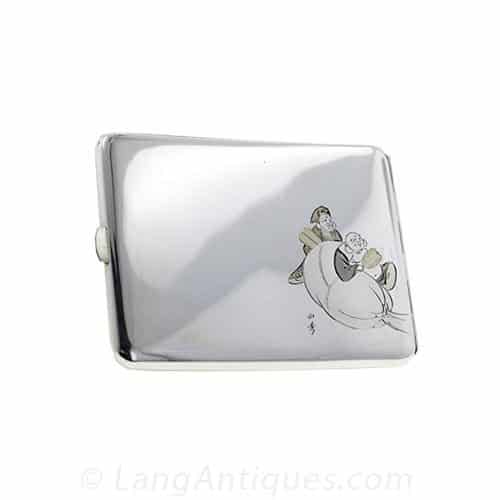