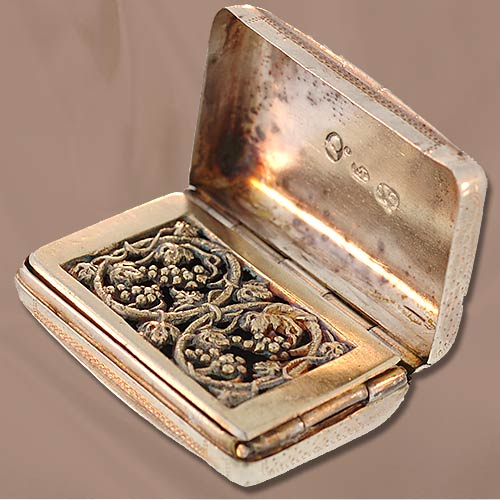 In present-day society, personal hygiene has been elevated to a very high priority in judging and being judged by our peers. Personal hygiene, however, was not always so meticulous. Prior to the introduction of soaps, and their easy accessibility, people needed a reliable means to mask the varied smells and odors wafting through their environment. The vinaigrette served that purpose admirably. Designed as a miniature container with a small sponge that could be saturated with sweet-smelling perfumes and oils, it was held under the nose to mask less than fragrant surroundings.

Many aromatic herbs such as sage, cinnamon, lavender, mint, and rosemary, mixed with alcohol and acetic acid to create a pleasant perfume were employed in this endeavor. Not only did these essences provide protection from foul odors but, it was believed at the time that they could protect one from cholera as well. When the sponge was soaked only in vinegar, as per its original use, it could help prevent the wearer from fainting.

Used by both men and women, vinaigrettes were suspended from chatelaines, placed in pockets, hung from long chains, bracelets or finger rings. Often designed in the shape of a rectangular box, the more spectacular vinaigrettes took on the look of a vase of flowers, a purse, an urn; almost any contemporary theme. Made from multicolored gold or silver and sometimes silver-gilt, many were decorated with Italian mosaics, mother-of-pearl or other gem materials. Naturalistic motifs and landscapes were elaborately engraved on the covers c.1820. Vinaigrettes could also feature a gemstone thumbpiece and the open grid, which held the sponge in place, was usually designed with elaborate and decorative piercework.