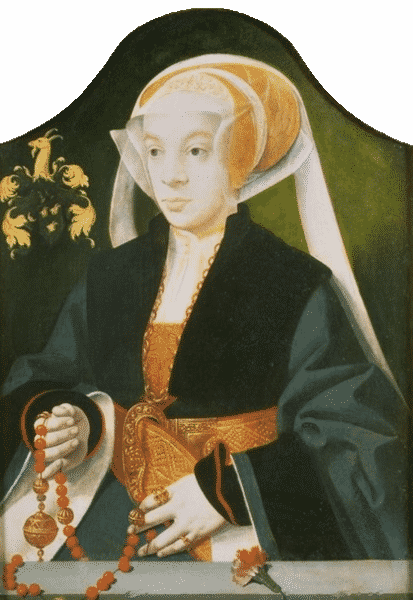 Portrait of a Woman Holding a Pomander on a Beaded Cord by Barthel Bruyn the Elder. Date ca. 1547

From the Middle Ages through the Renaissance, pomanders were considered an important and even necessary accoutrement in navigating through a pungent and often foetid environment. The jeweler’s talent and inventiveness was sorely challenged by the creation of these delicate cages of gold and gems designed to hold perfumes, cloves and ambergris -scents that greatly enhanced everyday life.

The term pomander originated from the French “pomme d’ambre”, translating to “apple of ambergris’’ and originally referenced the mixture of scented material, such as ambergris, clove, cinnamon, musk or civet that was rolled into a ball and held in a netted covering. The earliest known pomanders were reportedly from the East and reserved for the use of nobility and clergy. By the 14th century, the name pomander had evolved to also refer to the container, which became increasingly more decorative and symbolic. The earliest containers were spherical, opening to reveal two equal halves (referred to as loculi in French) perhaps influenced by the form of clove studded fruit.

It is hard to imagine today the central role in warding off maladies that perfumed air was considered to play in the Medieval and Renaissance period. It was thought that the permeability of the skin was highly susceptible to infection and disease by noxious odors and, in an ironic turn, that the act of bathing too frequently would only further increase this susceptibility. In a world in which foul odors were not only a cause of olfactory distress but considered to be a cause of plague and infection, it seems only natural that these prized mixtures of scents were contained in suitably decorative and precious containers. 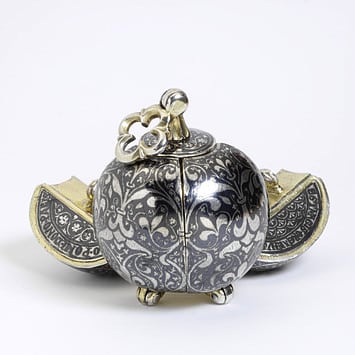 Pomanders developed into intricately segmented vessels holding a variety of scents. Beautifully wrought in silver or gold, they were often lavished with such details as fine filigree work, designs in enamels or niello and adorned with pearls and precious stones. As noted in Secrets of Aromatic Jewelry:

Additional magical powers were attributed to pomanders if they were affixed with or attached to gemstones, which, according to one then-current theory, were formed when water was condensed by odor. Not only were these faceted, color-laden, light attracting jewels rare and beautiful, but they themselves were regarded as protectants and curatives.1

Many pomanders were also engraved with initials and special protective inscriptions and the basic sphere was joined by vessels of varied shapes, many with symbolic meanings. Ships, skulls, snails, books, apples, hearts and crucifixes are just a few of the various forms these jewels were fashioned into. Pomanders were of various sizes, hung from belts and chains worn around the waist or fashioned as pendants for necklaces while others were made as beads or even rosaries. Joan Evans writes in, A History of Jewellery 1100-1870:

Mary Queen of Scots had two complete accoutrements de senteurs, comprising a double head ornament, carcanet, cotiere and belt, besides bracelets, rosaries, and chains of pomander beads. She went to her death wearing a chain of pomander beads from which hung an agnes dei.2

By the early 1700s, pomanders were fashionably smaller in size, typically not larger than 1-2 inches and could be attached to delicate neck chains or chatelaines or even fashioned into buttons or rings. Delicate enamel work was a typical feature of these smaller pieces and in France, more elaborate constructions made of carved quartz or onyx with gold hinges were popular (boîte de senteur.) It is also around this time that pomanders and aromatic jewelry, perhaps due to the dying out of the plague in 1665, become increasingly less prominent, almost disappearing entirely from the portraiture of the time. 3