Diamonds as We Know Them

When we think of a diamond, most of us will form an image in our mind which closely resembles the image above. This cutting design has become the ultimate standard and almost all of the rough diamonds that are found these days end up being fashioned in this style. We call it the Brilliant, the Standard Round Brilliant to be exact. The term ‘brilliant’ refers to the optimal light return this cutting design produces. When light falls onto a transparent gemstone it enters the stone and undergoes refraction. In order for the observer of a diamond to experience the stone’s ‘brilliance‘, light needs to be reflected within the gem so that it leaves the stone in the direction from which it came allowing it to reach the observer’s eye. The Brilliant is the result of optimizing this effect by fashioning the diamond in a specific way.

Brilliancy: a Gemstone Needs to be Cut with Correct Crown and Pavilion Angles for Light to be Reflected Back up Through the Crown and Appear Bright.

Shallow and Deep Stones Will Leak Light Through the Pavilion Causing Loss of Brilliance.

Diamonds as They Knew Them

In the ancient world, diamonds were coveted for their supreme hardness. They symbolized invincibility and were worn by rulers who saw their status reflected by this superior stone. Their beauty was a secondary feature at best. In fact, in the early days diamonds weren’t that pretty at all when looked upon with a modern eye. At the end of the Middle Ages, when diamond fashioning started, they weren’t cut to achieve spectacular light effects. Table Cuts showed some brightness but nothing like what we are so used to today. The other popular cut attempted to resemble the natural ideal: a crystal point which shows very limited brightness and was loved because of its shape and, when polished, surface reflection.

Something changed during the 17th century. Diamond cutters in Europe had seen their arsenal of fashioning techniques evolve and their customers, the Baroque nobility, developed a taste for gems which sparkled in all colors of the rainbow and appeared brighter than ever before. The now so popular Rose Cut stones with their numerous little facets reflecting the candlelight in all directions needed to be complemented by something new, something bright and shiny.

A lot has been written on how the Brilliant came into being. Since the beginning of the 19th-century, various historians have published views on the birth of the Brilliant. Most often the names of Vicenzio Peruzzi and Cardinal Jules Mazarin are encountered in these writings. The first having been a Venetian diamond cutter credited with the first true brilliant design and the second with similar credits.

These two ‘facts’ have been repeated ad nauseam in articles discussing the history of the Brilliant and have consequently become widely accepted. Whether Cardinal Mazarin designed a brilliant remains yet to be proven though. The only thing that is known with any certainty, is that he commissioned the twelve largest French crown jewels to be recut into a ‘new design’.

With Peruzzi, it goes even a step further. In 1813 a French jeweler named Claire wrote ‘La Science des Pierres Précieuses’ in which he is the first to name Peruzzi as the inventor of the first brilliant around 1680. A few historians have since tried to find proof of this and all have come to the same conclusion: there is no evidence a diamond cutter named Vicenzio Peruzzi ever lived. It is like the man is a completely fictive character in Claire’s text.

In 1750, David Jeffries, an English jeweler and diamond dealer wrote his Treatise on Diamonds and Pearls in which he does an excellent job in teaching his readers how to recognize a good brilliant from a bad one but unfortunately, he doesn’t get into the origin of the design. Brilliants had been around for some 50 years by the time he wrote his book and from Jeffries, it can be deduced that a standard had evolved. Please do take note of the fact that the old Table and Point Cuts were still in fashion at the beginning of the 18th century as well. 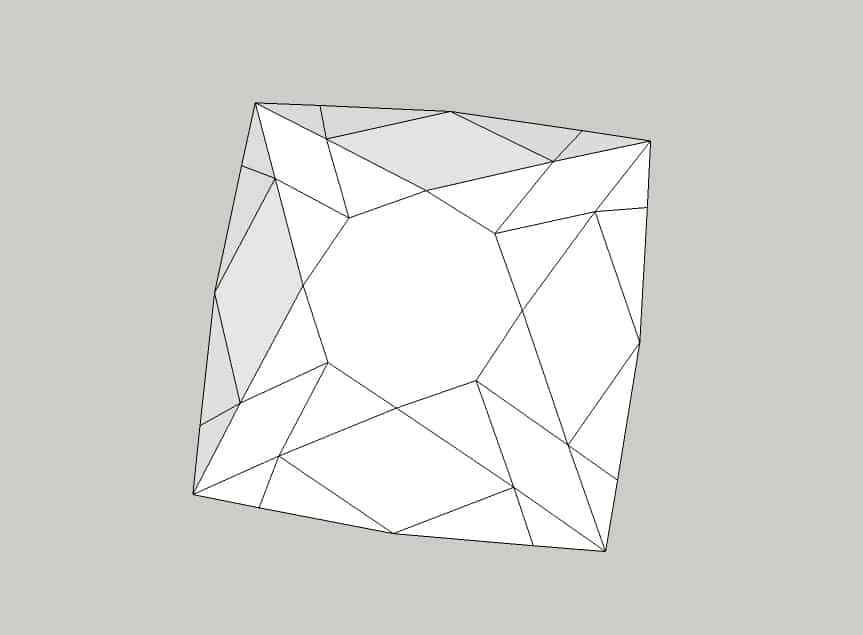 Claire’s ‘Peruzzi Cut’ with a Perfectly Octagonal Table Facet and a Facet Arrangement Parallel to the Sides of that Octagon.

Round, oval and other shaped Brilliants were cut in these early days but just weren’t the standard and only occurred in instances where the rough happened to be favorable for such an outline. The Brilliants Jeffries describes are squarish and have main angles of 45° for both the crown and pavilion. The table facet isn’t octagonal like Claire’s Peruzzi Cut but displays a fourfold symmetry. The lower girdle facets are short, the girdle thin, but not knife-edged to avoid chipping and the design has a culet facet of a certain size. His description is the first attempt at standardizing the brilliant design, something which would see successive modifications in more recent times.

Although Jeffries’ writings show that the path to standardization had been taken, Brilliants of the 18th and 19th century show no such sign. The means diamond cutters had to introduce a symmetrical outline, a requirement for even facet distribution and were still extremely limited. Bruting still occurred by hand and was a time-consuming and difficult task. One also has to consider that shaping a stone to become symmetrical in its outline costs a lot of material. Weight has always been the decisive factor when pricing diamonds so cutters have alway been keen to retain as much weight as possible. This explains the predominantly squarish outlines of early brilliants. Most rough had square shapes as had the diamond cuts of the past which acted as a starting point: the great recutting of old cuts had begun.

The rise of the Brilliant coincided with depletion of the Indian diamond mines so at first, it was mainly existing Table and Point Cut stones which were recut into the new fashionable design. Many of the old Table Cuts had missing or blunted corners, a problem which the cutters solved by creating a square outline with rounded corners: a cushion shaped stone. When, around 1730, a steady production of Brazilian diamonds was realized most of this new rough was cut into cushion shaped Brilliants. The term used to indicate these brilliants of the second half of the 18th and most of the 19th century is the ‘Old Mine Cut’. The term was introduced in the late 19th century and is still encountered today. 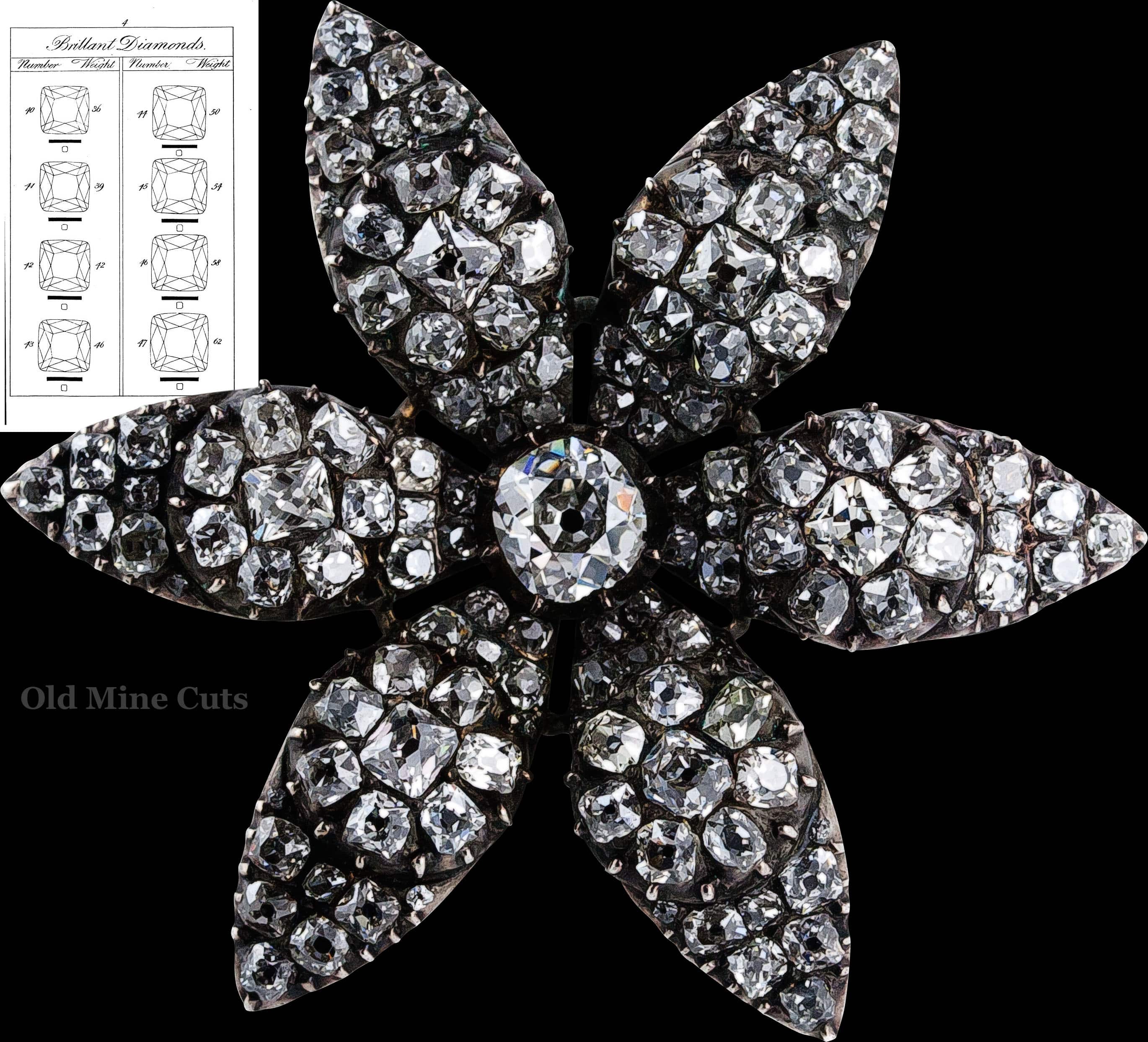 A Georgian Pin Set with Numerous Old Mine Cut Diamonds.

In the Top Left you Can See the Drawings of Jeffries’ Square Brilliant Ideals. This Image Clearly Displays that this Ideal Wasn’t Achieved Often.

Round Baroque Brilliants had been around since the end of the 17th century as exceptions but weren’t the most fashionable ones. This changed gradually over the second half of the 19th century. The great pioneer of the Round Brilliant was Henry D. Morse (1826-1888) who was a diamond cutter from Boston, USA. Morse met an engineer named Charles Field and together they invented a steam-driven bruting machine which they patented in 1874. This machine enabled Morse to shape symmetrical, rounded stones more easily which could then be fashioned with a symmetrical distribution of facets.

A drawback was that the rounding of rough with the aid of the bruting machine caused weight losses which were unacceptable by the cutters of that day. This was solved when a power driven circular saw was invented, allowing cutters to waste less by using the cut off sections as rough for small stones.

The introduction of mechanical cutting devices revolutionized the diamond cutting industry. Round became the new standard and symmetry became an important factor. European diamond cutters quickly adopted the use of machines and started producing Round Brilliants en masse. The products of these later 19th and early 20th-century cutting houses are called ‘Old European Cuts’, a term which indicates stones with round outlines, reasonable symmetry, octagonal table facets, deep pavilions, high crowns and short pavilion bezels. The open culet persisted as well. Occasionally the term ‘Old European Cut’ is encountered to indicate all somewhat round brilliants predating the introduction of the Standard Round Brilliant, even the completely unsymmetrical ones which were fashioned in the 18th century. 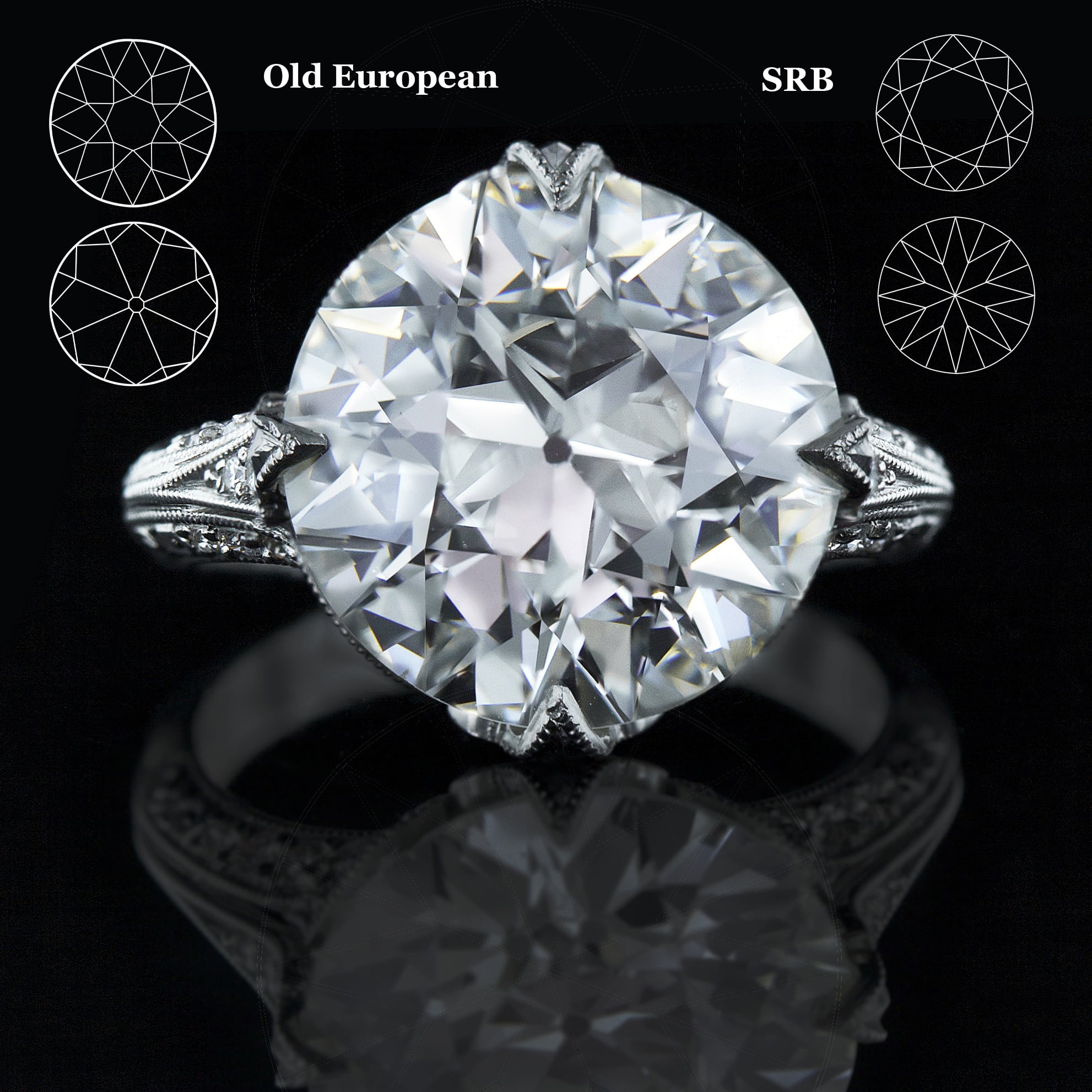 The Images in the Top Right and Left Show the Difference Between the Old European and Standard Round Brilliant.

Morse didn’t just revolutionize diamond cutting techniques, he also revolutionized the Brilliant design by lowering the angles of the crown and pavilion to increase brilliance. He further reduced the size of the table and culet facet and lengthened the pavilion bezel facets. His ideas weren’t instantly implemented by the men who so gratefully adopted his machines, his contemporary cutting colleagues in Europe, but were picked up some 30-40 years later in the second decade of the 20th century by two gentlemen named Frank Wade and Marcel Tolkowsky. Both these men published their ideas of how a properly proportioned brilliant should be built up. Wade published his views in 1916 and comprised modification of the brilliant design. Tolkowsky did the same but then in Europe in 1919, trying to back up his findings with mathematical calculations of the brilliance.

Tolkowsky’s proportions gradually became the standard over the 20th century. The culet has become a point and the pavilion bezels longer and narrower. These days almost all diamonds are cut in the same Standard Round Brilliant (SRB) design. 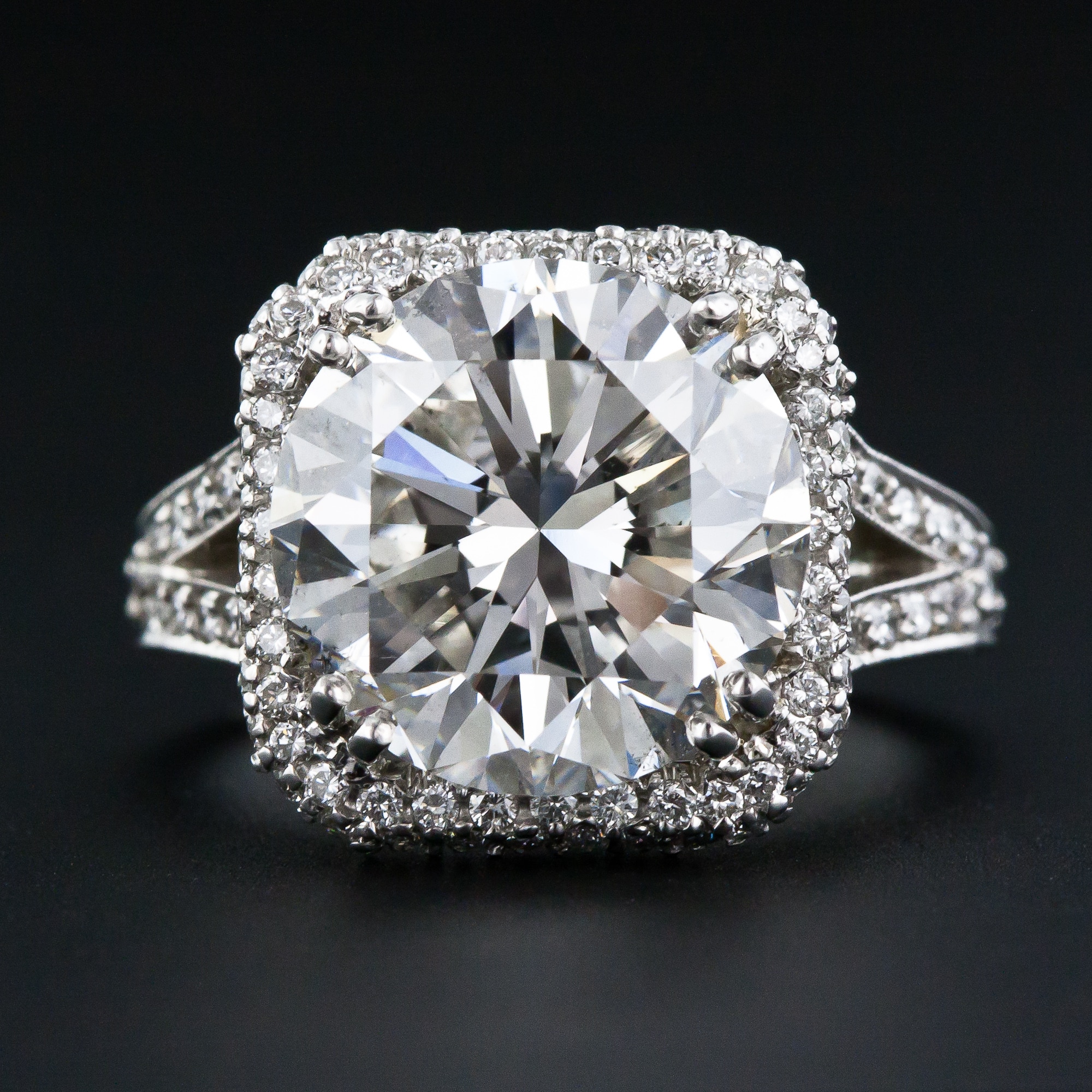 A Standard Round Brilliant.

The Brilliant design has been implemented on various shapes resulting in stones such as ovals, hearts, marquise, and pears. All these stones display the same principle built up of the brilliant, it is just their outlines which differ.

Video: The Evolution of the Brilliant