At the end of the reign of Nicholas I, Emperor of Russia, and the beginning of the reign of Tsar Alexander II – after whom the mineral alexandrite was named – a new garnet variety was discovered in the Ural mountains. Circa 1853, in the settlement of Elizaventinskoye, a group of children found some pretty green pebbles along the Bobrovka River. The stones were identified at the time as chrysolite or olivine, otherwise known as peridot. A visiting Finnish mineralogist, Nils von Nordensheld, declared that the stones were actually a new mineral (definitely not chrysolite.) He spoke before the St. Petersburg Mineralogical Society in February of 1864 pronouncing the new mineral to be an andradite variety of garnet with a chromium component. Although the gem has a high refractive index and dispersive powers, which actually outrank diamond, they are usually suppressed by its bodycolor, thereby earning it the name demantoid (diamond-like.)

Soon demantoids were being incorporated in some of the finest jewelry ever created. The famous court jeweler Fabergé used demantoids in his jewelry and made it a very popular gemstone. At the end of the 19th century, there was a true ‘demantoid fever’ infecting all of Europe. 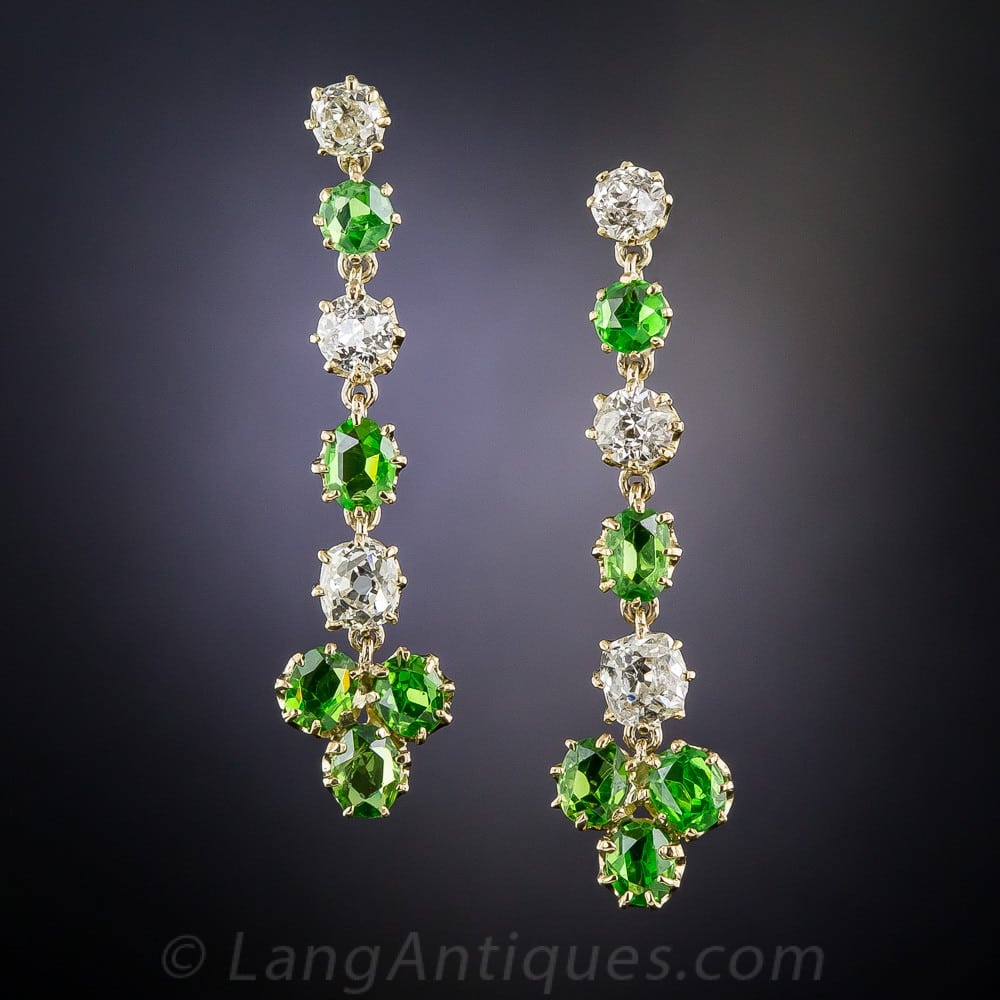 The Edwardian and Belle Epoque jewelry periods were literally punctuated by demantoid garnets. Unfortunately, Russian gem production was effectively halted by the Bolshevik Revolution in 1917. Personal adornment was no longer a priority and the Urals began to produce more industrial products, especially at the onset of World War II when they primarily produced war machinery.

Two major districts in Russia within the Central Ural Mountains have historically produced demantoid. The Nizhniy Tagil district, near Elizavetinskoye, contains placer deposits along the Bobravka River and the primary deposit at the head of the Bobrovka River, which is also the source of the placer deposits. The Sissertsk district at Kladovka and Korkodin are primary deposits. In addition, there are five river placers in the region. There are also some new discoveries in the Arctic Urals that have not been fully explored and examined. Mining in these areas has been sporadic and often only as a by-product of platinum and gold mining. Since 1915 most of the demantoid has been mined by private, illegal miners or by locals picking over the tailings piles. Namibia has also been producing some demantoid, but not with the same vibrant color as the Ural deposits.

This andradite garnet which is usually bright yellowish-green is one of the highest-priced gemstones one can find, especially when it has the rare and intense grass green color which rivals emerald. Demantoid gets its desirable green color from the inclusion of chromium into the andradite composition. The color ranges from yellowish or brownish green to an incredible, bright yellowish-green. The superb color of the finest Russian material is the hue by which all demantoids are judged. It has a very high brilliancy and a high dispersion, which adds to the beauty of the hue. It has a relatively high refractive index, reasonable hardness, and a vitreous to adamantine luster. Stones with typical and well-formed horsetail inclusions, an inclusion unique to demantoid and found in most Russian specimens, are some of the most coveted gemstones. Most demantoids are less than one carat, but there are rare, larger exceptions to this rule. Tsavorite (a green form of grossular garnet) gets its color from vanadium and its finest specimens are sometimes confused with/sold as demantoid. 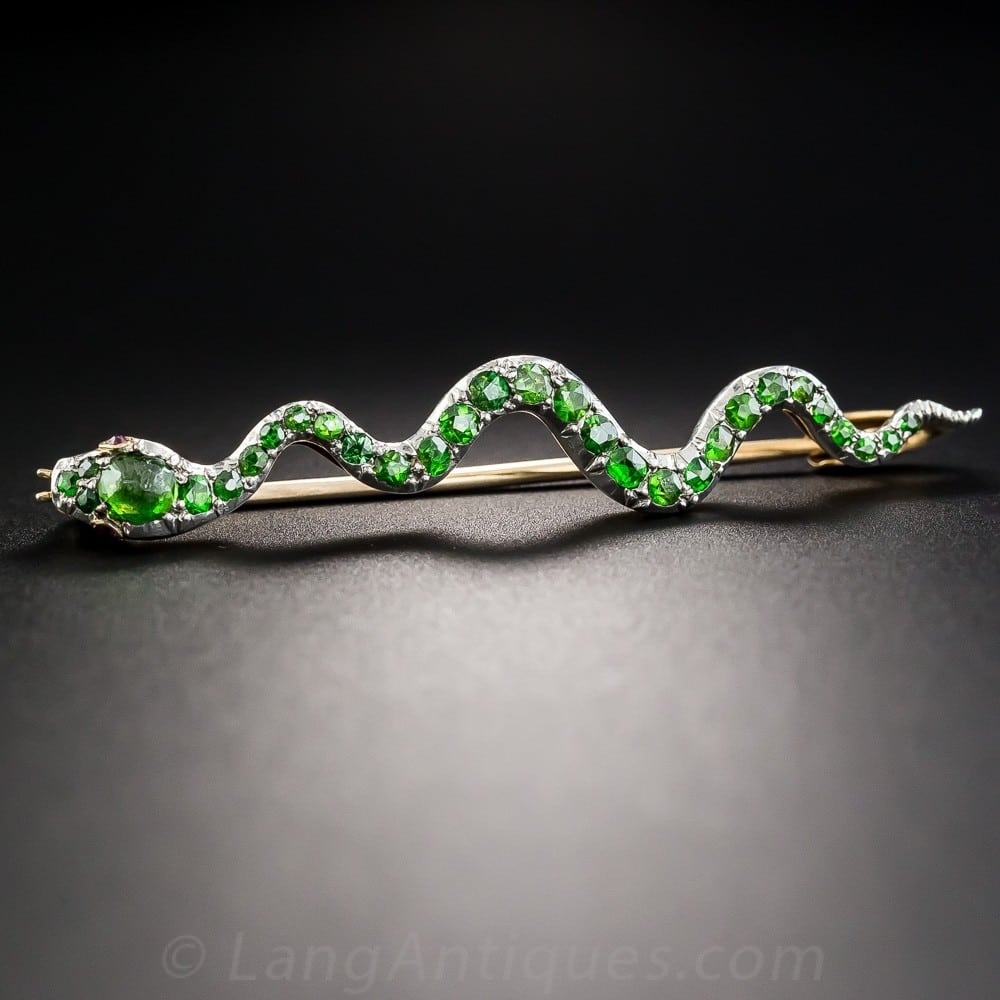 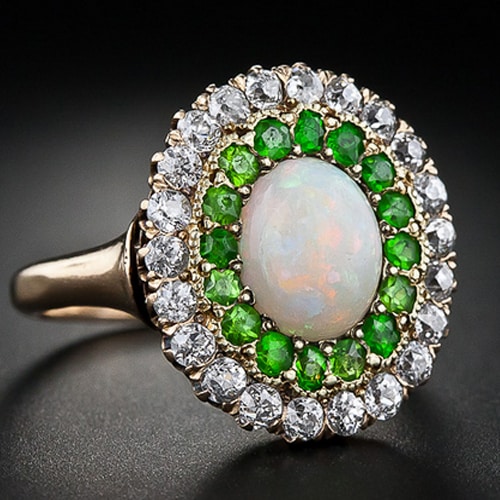 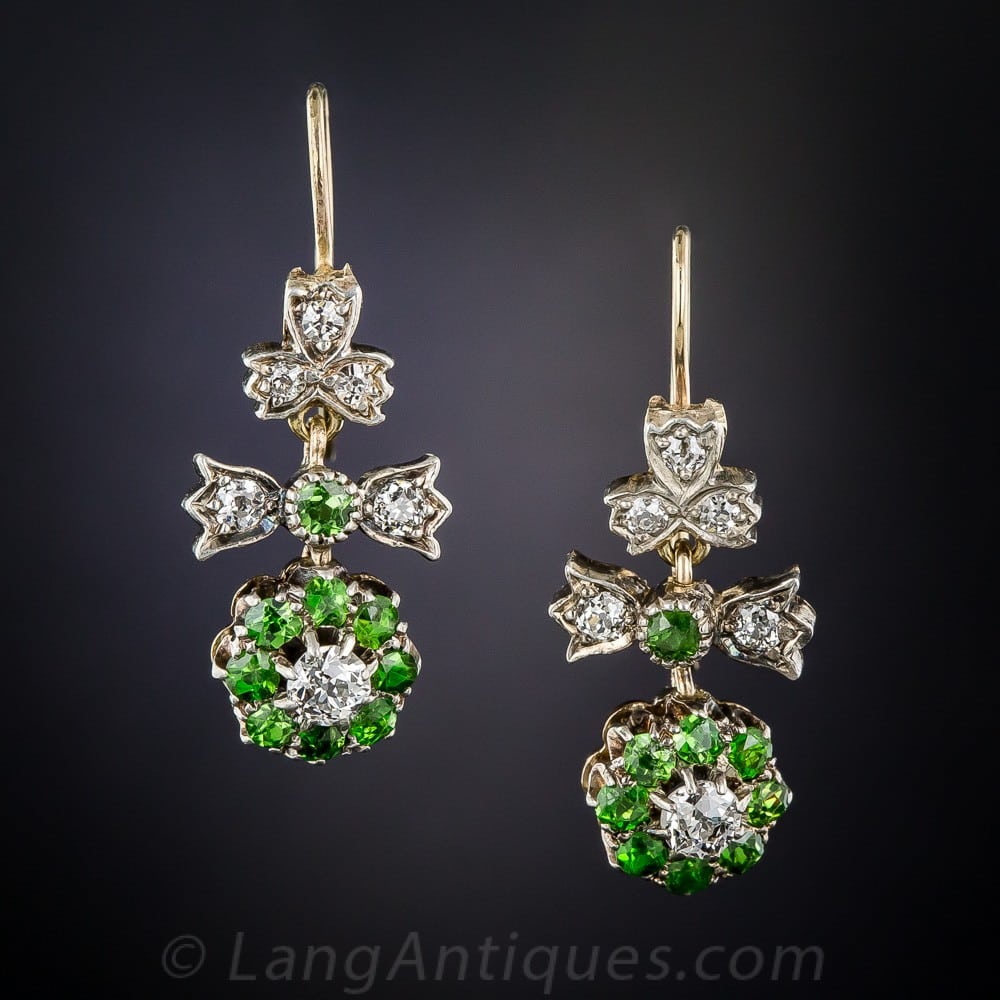