Granulation and its Techniques

Granulation (from Latin: granum = “grain”) is a goldsmith‘s technique whereby the surface of a jewel is decorated with small spheres of precious metal, named granules, according to a design pattern. The oldest archeological findings of jewels made with this technique were found in the royal tombs of Ur, in Mesopotamia and go back to 2500 B.C. From this area, the technique spread to Anatolia, in Syria, to Troy (2100 B.C.) and finally to Etruria (8th century B.C.). It was the gradual disappearance of the Etruscan culture between the third and second centuries B.C. that was responsible for the decline of granulation.1 The ancient Greeks employed granulation work as well, but it was the craftsmen of Etruria who became famous for this technique due to their mysterious deployment of fine powder granulation2 without apparent use of hard solder. 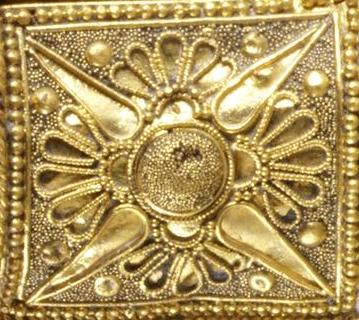 Granulation is probably the most mysterious and fascinating of ancient decorative techniques. Introduced by craftsmen Fenici and Greci to Etruria in 8th century BC, where the knowledge of metallurgy and the use of precious metals were already at an advanced stage, expert Etruscan goldsmiths made this technique their own to create works of art of unequaled complexity and beauty.1

During the first half of the 1800’s several excavations were carried out in the vicinity of Rome (Cerveteri, Toscanella and Vulci) and Southern Russia (the Kertch and Taman peninsulas) which revealed ancient Etruscan and Greek jewelry. These jewels were decorated with granulation. The jewelry came to the attention of the Castellani Family of jewelers who were very involved in ancient jewelry research. The finds from the Etruscan burial sites attracted the most attention due to their use of extremely fine granules. Alessandro Castellani studied these artifacts in great detail in order to attempt to unravel their method of fabrication. It was not until the early 20th century, after Castellani’s death, that the puzzle of colloidal/eutectic soldering was finally solved.

Although the secret remained a mystery to the Castellanis and their contemporaries, the newly discovered Etruscan jewelry sparked an archaeological jewelry revival circa 1850’s. Goldsmithing techniques were discovered that enabled Castellani and others to faithfully reproduce some of the finest ancient jewelry ever excavated. Many of these techniques were quite different from those employed by the Etruscans yet still yielded a passable result. A number of these Archaeological Revival jewelry objects are now in important jewelry collections around the globe, along with their ancient counterparts.

There are three main techniques that can be used to adhere small granules to a metal surface: hard soldering, fusing, and colloidal soldering. The materials used for granulation are usually high karat gold and/or silver alloys; alloys below 18 kt. gold and sterling silver are not suitable for granulation. The gold alloy used to reproduce the ancient goldsmith techniques is 22 kt, as it was in the original jewelry. In every case, the process starts with the creation of the granules themselves.3The welding of the granules and the filigree is called ‘colloidal soldering’and uses carbonates, sulphates or copper oxides. The technique is also empirically described by Gaius Plinius Secundus, better known as Pliny the Elder, in Naturalis Historia, where he refers to it as ‘Chrysocolla’ which means gold glue. In Italy, it was known as ‘Santerna’.3
We can divide the decorative technique into two categories; silhouette and background. In the first case the profiles of figures, like animals, are created by granulated outlines and in the second case spaces, which were previously created by closed work filigree, are filled in with granulation.3

The granules are made from the same alloy as the metal to which they will be applied. One method begins by rolling out a very thin sheet of metal and scissoring very narrow fringes along the edge. The fringe is trimmed off and the result is many small squares or platelets of metal. Another technique for creating grains uses very thin wire coiled around a thin mandrel, like a needle. The coil is then cut into very small jump rings. This creates very symmetrical rings that result in more evenly sized granules. The goal is to create many spheres the same size having a diameter of no larger than 1 mm.

The metal platelets or jump rings are coated in charcoal powder to prevent them from sticking together during firing. The bottom of a crucible is covered with a layer of charcoal and the metal bits are sprinkled on so they are as evenly spaced as possible. This is followed by a new layer of charcoal powder and more metal pieces until the crucible is about three-quarters full. The crucible is fired in a kiln or oven, and the precious metal pieces warp into small spheres at the melting temperature for their alloy. These newly created spheres are left to cool. Later they are cleaned in water or, if a soldering technique will be used, pickled in acid.

Granules of uneven sizes would not generate a pleasing design. Since it’s impossible for a goldsmith to create perfectly matched spheres of the exact same diameter, the granules must be sorted prior to use. A series of sieves are used to sort the granules.

Soldering metal items together relies on the capillary action of a lower melting point solder flowing between the items to be bonded. Soldering is a commonly used technique for bench jewelers and has been practiced since ancient times. Soldering small metal grains, however, poses a problem. In order to solder granules, extremely small paillons of solder need to be cut and positioned near the point of contact between the granule and the metal. It would be very difficult to replicate this process repeatedly with the hundreds of granules that need to be attached to achieve a design. Additionally, solder requires the use of a binding agent called flux. When flux is heated it bubbles, this easily dislodges small items and would send granules jumping everywhere. 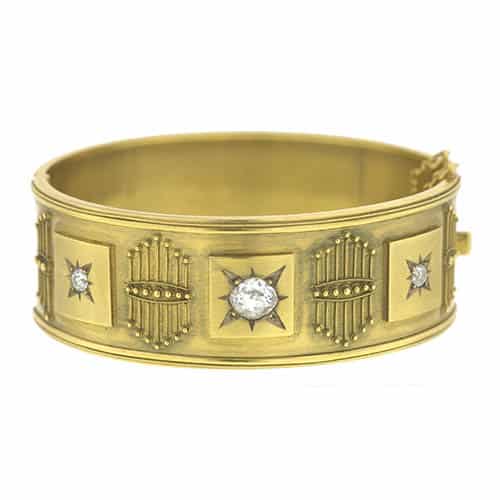 One way to avoid this problem is to file the solder to a coarse powder and mix it in with the flux in a small can called a rochoir.4Goldsmiths using this technique need to create their own rochoir as this is not a commercially available tool. The area to which the granules will be attached is painted with tragacanth – which acts as a glue – and the granules are positioned using a very fine paintbrush. After drying, the granules are sprinkled with the flux-solder powder and heated to the point that the solder flows underneath the granules through capillary action. This process will leave solder remnants in the gaps between the granules which cannot be removed.

This method was not used by the ancient Greeks or Etruscans. Castellani, however, did create items using this technique.

Fusing welds two metals of the same alloy together through the use of heat alone. A sheet of metal with approximately the same thickness as the diameter of the granules is necessary to get an even heat distribution. Once the granules are positioned using a diluted flux and a fine paint brush, the whole thing is fired in an oven with a reducing atmosphere. At the point of reaching a melting temperature the granules and sheet metal fuse together. The great advantage of this method is that no flux or solder remains. This is an advanced goldsmithing technique that requires great skill and practice.

This was the technique used by the Etruscans in the first millennium B.C. Fusing was unknown to the Castellani and his Italian contemporaries.

A more modern way to accomplish fusing is through the use of an electric current. This is referred to as fusion-welding. The electric current is applied to each granule, passing through the granule to the base, generating enough heat to fuse the granules to the object. The advantage of this method is that one can use it on finished jewelry items, even those already stone set. The disadvantage lies in the fact that the granules may not snuggle as tightly together as the design requires or that the current flow will be drawn to the neighboring granules, resulting in looser joins.

Colloidal or eutectic soldering is one of the ancient techniques that was used in Etruria. This technique makes use of a colloidal mixture of tragacanth gum and copper salts. This compound lowers the melting temperature of the two metals in contact (the granules and the base) after which the copper diffuses into both at the point of contact. This results in a strong metallic bond.

The surface of the metal is painted with the colloidal solder. The granules are arranged on top of the solder with a fine paint brush and left to dry slowly. The piece is fired in a reducing atmosphere and the tragacanth burns away releasing the copper salt from the compound. At the eutectic soldering temperature (890 degrees Celsius) the copper diffuses into the granules and the base linking them together. This requires good timing and a great deal of skill.

Due to the use of copper salts this technique is also sometimes referred to as chemical soldering. 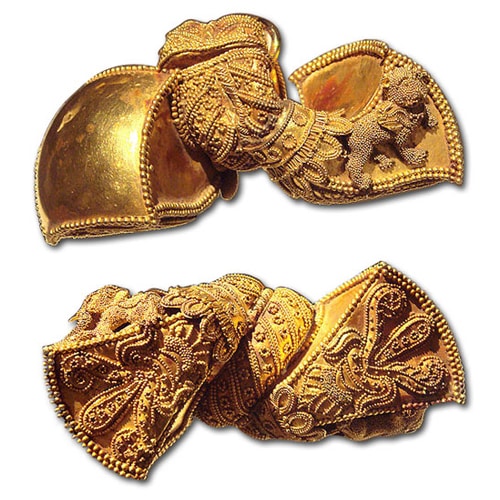