Nephrite is a magnesium and calcium silicate with an interlocking fibrous structure that gives it extreme toughness. It is a member of the Tremolite/Actinolite Series in the Amphibole family.

Iron is the coloring agent in nephrite. The more iron present, the darker the nephrite will appear. A high iron content causes deep green to black colors while a low iron content results in lighter shades, including the so-called ‘mutton fat’ jade.

Nephrite is found throughout the world, either in situ or in alluvial deposits resulting from weathering.

A BRIEF HISTORY OF NEPHRITE

Nephrite is an extremely tough mineral and was originally used in ancient times to fashion tools such as knives, axes and clubs. Nephrite jade is abundant worldwide. It is a metamorphic product caused by the alteration of serpentinites. 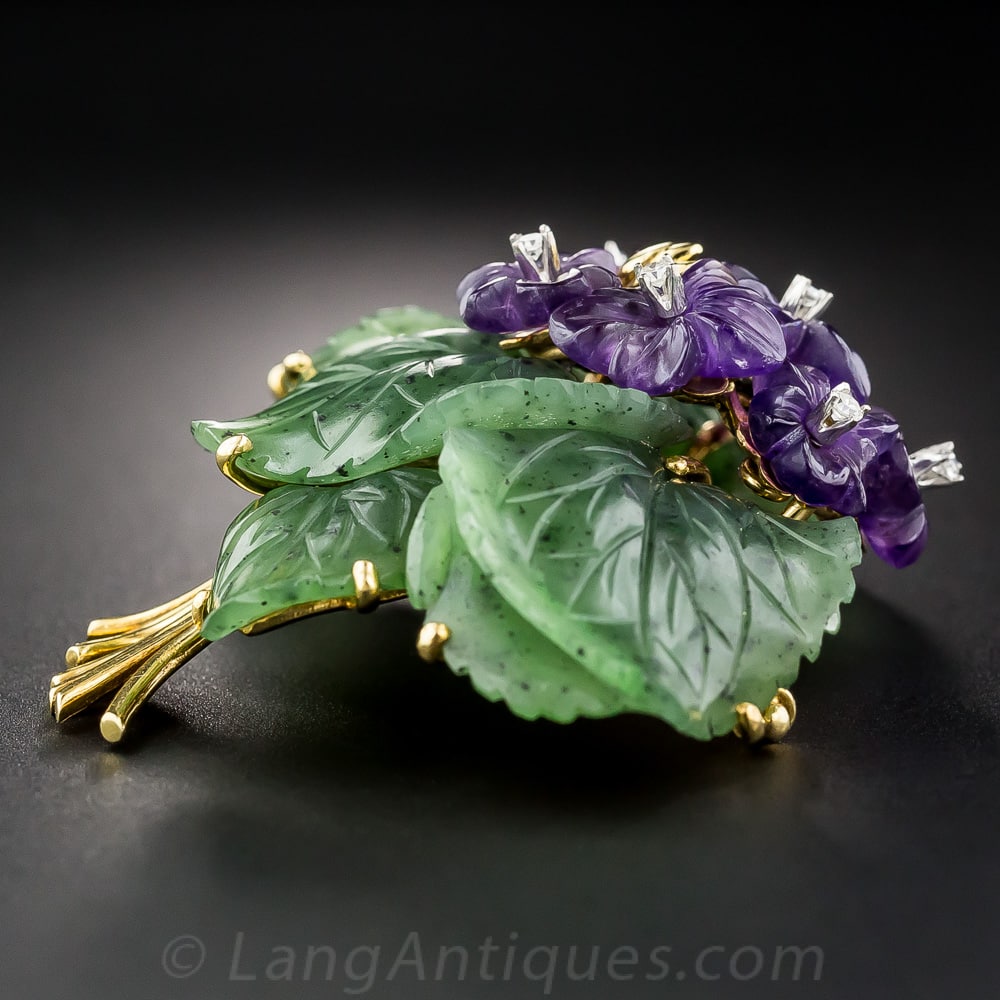 One of the earliest and most important sources of Nephrite to the Chinese was along the northern slopes of the Kuen Lun Mountains in eastern Turkestan. The Chinese have revered the nephrite variety of jade more than any other gem. For over 3000 years, flat discs, termed pi, were carved from nephrite to worship heaven.

Jade was equally important after death, with pieces placed in the deceased’s mouth to serve as a heart in the afterlife. Two gem minerals are both considered to be jade, jadeite and nephrite. Jadeite was not discovered in Asia until the mid-1800s in Burma.

The source of the nephrite used by the Maoris in New Zealand was found in situ in the province of Otago.

During the California Gold Rush, Chinese placer miners recognized that there were boulders of nephrite in California Rivers. Many of these boulders were shipped back to China.

THE METAPHYSICAL ASPECTS OF NEPHRITE

Nephrite fosters emotional balance and stability. It aids in all matters of the heart. Nephrite is a protective stone, especially beneficial to children, as it guards against illness and brings about “psychic” protection.

Physically, nephrite jade is used in the crystal healing of problems with the physical heart and kidneys.

Nephrite jade is a stone of the heart chakra.

Jade and Its Worshippers

The term “jade” is currently used to refer to both the jadeite and nephrite varieties. This was not always the case. Ancient “jade,” revered throughout Chinese history, and the beautifully carved ancient objects so cherished and even worshiped by the Chinese, are all the nephrite variety of jade. The jadeite variety of jade was not introduced into China until 1784 when trade with Burma resumed after a long period of feuding. By way of a goodwill gesture, Burma sent China a relatively large quantity of a hard stone as yet unknown to the Chinese. In 1863 A French scientist named Damour analyzed the stone, found it was not nephrite, and named it jadeite. From ancient times, until relatively recently, jade was simply nephrite.

the wise have likened it to virtue. For them, its polish and brilliancy represent the whole of purity; its perfect compactness and extreme hardness represent the sureness of the intelligence; its angles, which do not cut, although they seem sharp, represent justice; the pure and prolonged sound which it gives forth when one strikes it represents music.Its color represents loyalty; its interior flaws, always showing themselves through the transparency, call to mind sincerity; its iridescent brightness represents heaven; its admirable substance, born of mountain and water, represents the earth. Used alone without ornamentation it represents chastity. The price which all the world attaches to it represents the truth. To support these comparisons, the Book of Verse says: “When I think of a wise man, his merits appear to be like jade.” And that is why the wise set so great store by jade…1

In Chinese culture, jade is valued more highly than gold. Ancient Chinese contests of skill awarded ivory for third place, gold for second and jade for the winner. Only the highest ranking royalty were permitted to ceremonial use of the finest jade.

An ancient Chinese legend tells us that even within the earth jade and gold are worlds apart, that they repel each other, since gold is of the material realm and jade is of the spirit.2

The term jade has its linguistic roots in the translation by Spanish navigators bringing this supposedly medicinal stone back from Mexico. In 1595 Sir Walter Raleigh wrote about jade (in Spanish piedra de ijada) as being useful “for spleen stones.” This was translated into French as pierre de l’ejade but a printer’s error turned it into le jade and in English it quickly became jade. Also known in Spanish as piedra de los riñones “stone of the kidneys” become lapis nephriticus in Latin, nephros in Greek which evolved into nephrite in English.

For over two thousand years nephrite jade has been mined in the Yarkland and Khotan regions of Turkestan. Nephrite was probably first collected from the rivers but was later mined upriver in the K’un Lun Mountains and carried by camel caravan back to the Chinese capital Peking (Bejing). Marco Polo noted that a bustling business in “chalcedonies and jaspers” found in the Turkestan region was being done. What he was probably witnessing were the nephrite caravans.

Another visitor to the area, Jesuit Astronomer, Benidict Göes noted in 1603 that mining methods required splitting vast blocks into slabs and then working them into sizes suitable for carrying on a camel. Some of the methods used included building a fire near a vein of jade thereby heating the stone. Vast temperature drops overnight would cause the stone to crack and jade harvesters would return in the morning to place wood wedges into the cracks and pry away the stone. The “winter” technique required holes to be drilled in the stone, filling them with water and waiting for them to freeze. The freezing process would crack the stone and the jade harvesters would return to collect the newly cleaved stones in the spring. 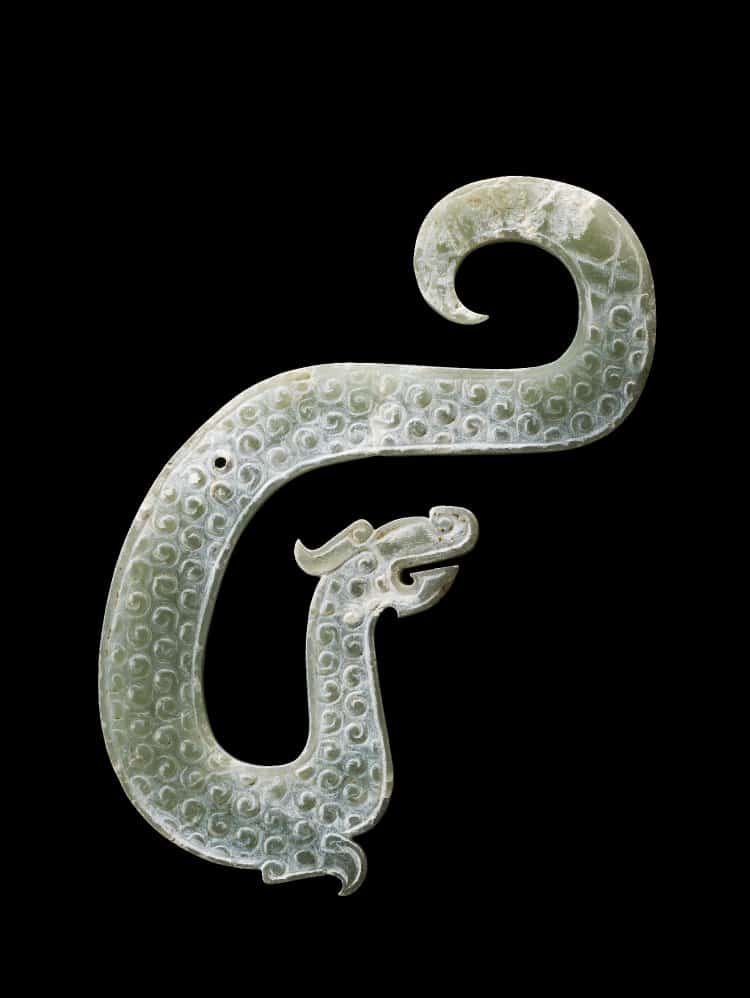 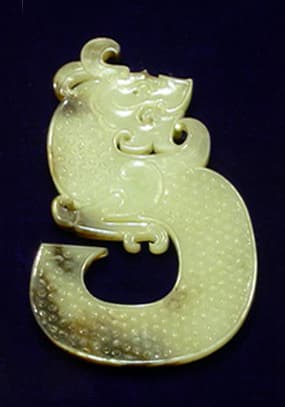 There are many legends to explain when the Chinese began carving nephrite and using nephrite objects like knives, utensils, and weapons, but it is hard to say when exactly the use of Jade began in China. The art of jade carving had already been known for centuries by the time the Zhou Dynasty began (1046-256BC). Iron was introduced during this time and the apex of the Chinese bronze era occurred, yet nephrite continued to be used to make important ceremonial vessels and religious representations. In fact, the Chinese never stopped using nephrite after the introduction of bronze as happened in other cultures.

Objects of worship, utensils, and ornaments carved from jade had been buried with the dead of the Shang Dynasty (prior to the Zhou Dynasty). These tombs served to preserve this ancient treasure. The modernization of China, specifically, building a transcontinental railroad, lead to the discovery of these treasure troves of ancient carved jade. Since the Chinese had guarded, revered and protected their ancestral gravesites for centuries, they were undisturbed until the building of railroads unearthed their heritage. Grave robbers soon followed and a booming business in ancient Chinese jade resulted with pieces being bought and sold – no questions asked. This chaotic reclamation of these ancient works of art made dating the objects difficult. Comparisons with known objects, dynastic symbols, and catalogs of tombs explored in a more scientific manner had to be used to date the items from these collections. 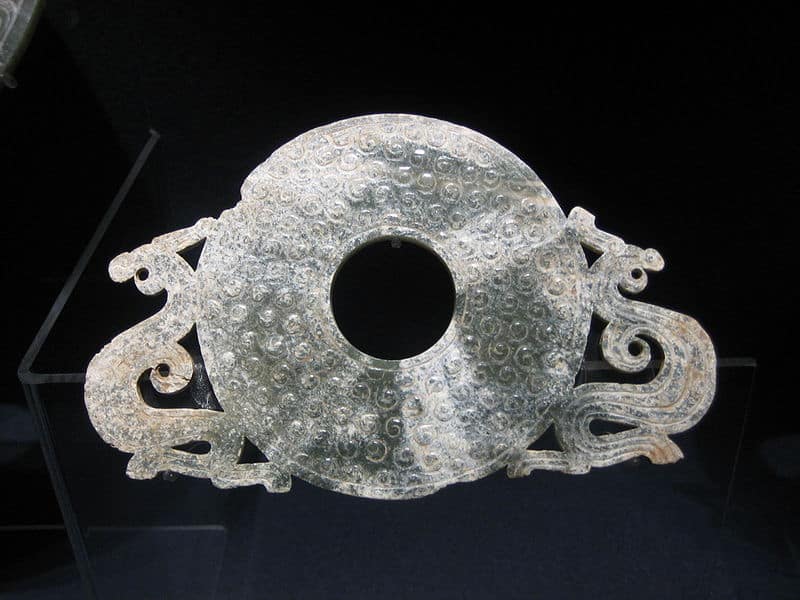 I Ching states “Jade is Heaven”. Confucians carried jade to purify the mind. Taoists called it Yang and Buddhists used it to reach the state of Samadhi. Jade holds a unique place in many Chinese religions. Almost every object or force in nature is found in jade symbolism. Flora, Fauna, Animals, the directions on a compass and celestial bodies.

Nephrite’s fibrous nature makes it quite difficult to carve and shape, but its toughness allows those shapes to be paper thin and for chains to be cut from solid blocks.

Supply of nephrite around the world is dwindling. Other sources are Lake Baikal in Siberia, South Island New Zealand, Jordanow Slaski, Poland, Frazer River Valley British Columbia, Kotzebue Alaska and Lander Wyoming California United States locations. As a result of this dwindling supply, the prices for raw nephrite material are much higher.

The Colors of Nephrite and Their Symbolism