Opal is a hydrous variety of silicon dioxide. It is unlike other minerals because it is not crystalline! Opal is made up of sub-microscopic silica spheres, bonded together with silica and water. The lower its original water content, the better the opals chances for longevity. Crazing in opal is created when there is a strain on the gem, caused by loss of water or changes in temperature. The play of color in opals is caused by the silica spheres being packed in an orderly array, which scatters the light in various directions (diffraction).

Opals with a play of color are normally cut as cabochons or occasionally carved.

Precious Opals can be classified as follows: 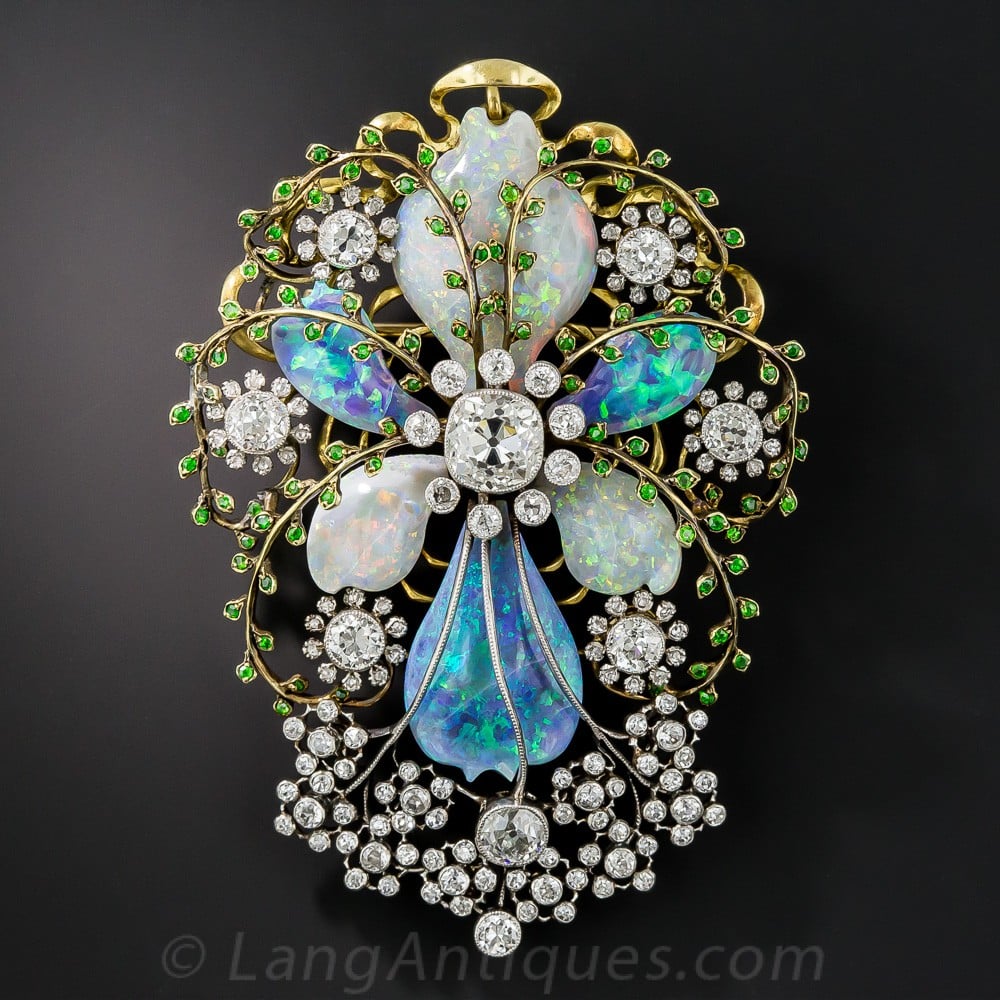 Play of Color can be classified as follows:

Pinpoint: small patches, close together
Harlequin: larger, more angular patches that Flash: Flashes, or sheets of color that appear and disappear when the gem is moved.

Opals that are transparent can be faceted; some faceted opals have play of color, others do not.

A BRIEF HISTORY OF OPAL

The name, Opal, evolved from the Greek “opallios”, meaning change of color. The oldest opal mines in the world were located in what is now the Czech Republic. The Czech mines have been documented as being active since the 14th century, but it is probable that these mines were the source for opal in ancient Rome. Czech opal mines were worked until 1932.

Mexican fire opal was known to the Aztecs, and introduced by the Conquistadors to Europe in the 16th Century.

Opals fell out of favor in the 19th century due to a book that was written by Sir Walter Scott in 1828. After vast opal deposits were found in Australia in 1887, Queen Victoria did her best to dispel any superstitions concerning them, by giving opal jewelry to her children, friends and family.

Opal was a favorite of Rene Lalique, the most famous of the Art Nouveau jewelry designers. Lalique’s opal jewels designed for Sarah Bernhardt are legendary.

THE METAPHYSICAL ASPECTS OF OPAL

Opal is thought to be a gem of inspiration. It fosters creativity and enhances one’s imagination. Opals have been used to eliminate nightmares and bring about happy dreams. It is also known to sharpen the memory.

Opal is one of nature’s most stunning contributions to the world of gemstones. A unique composition of microscopic cristobalite spheres arranged in layers within an amorphous hydrous silica jelly comprises opal’s unique crystal habit. Light refracted by these spheres, in some varieties, creates an amazing array of vivid colors referred to as play-of-color. This play-of-color is what makes opal such a beautiful and desirable gem. 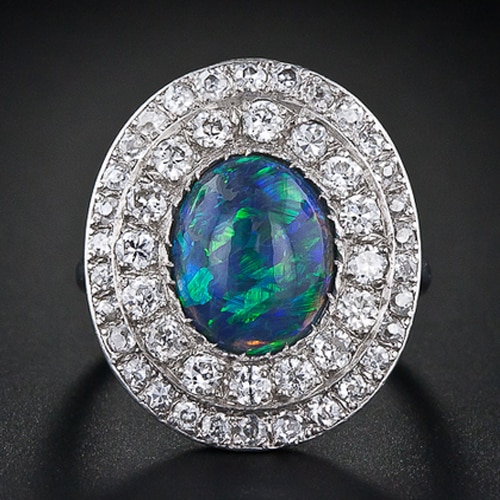 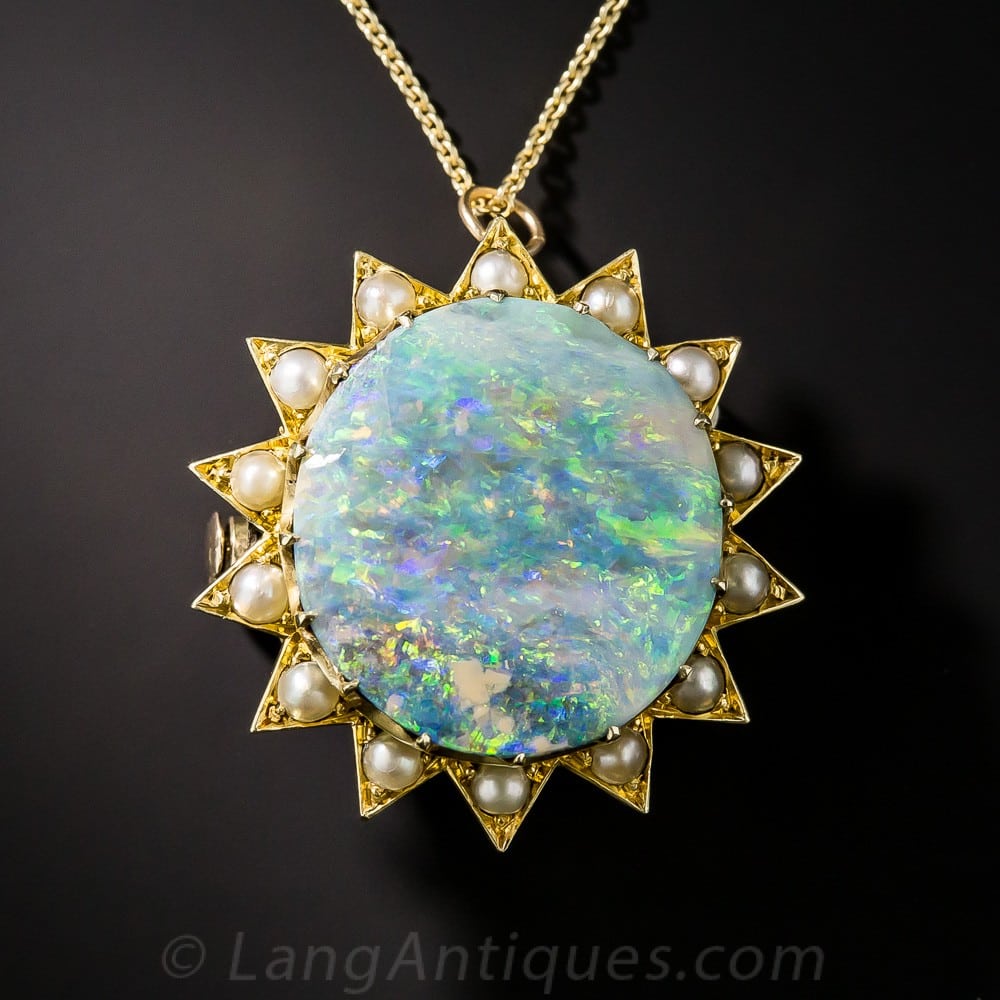 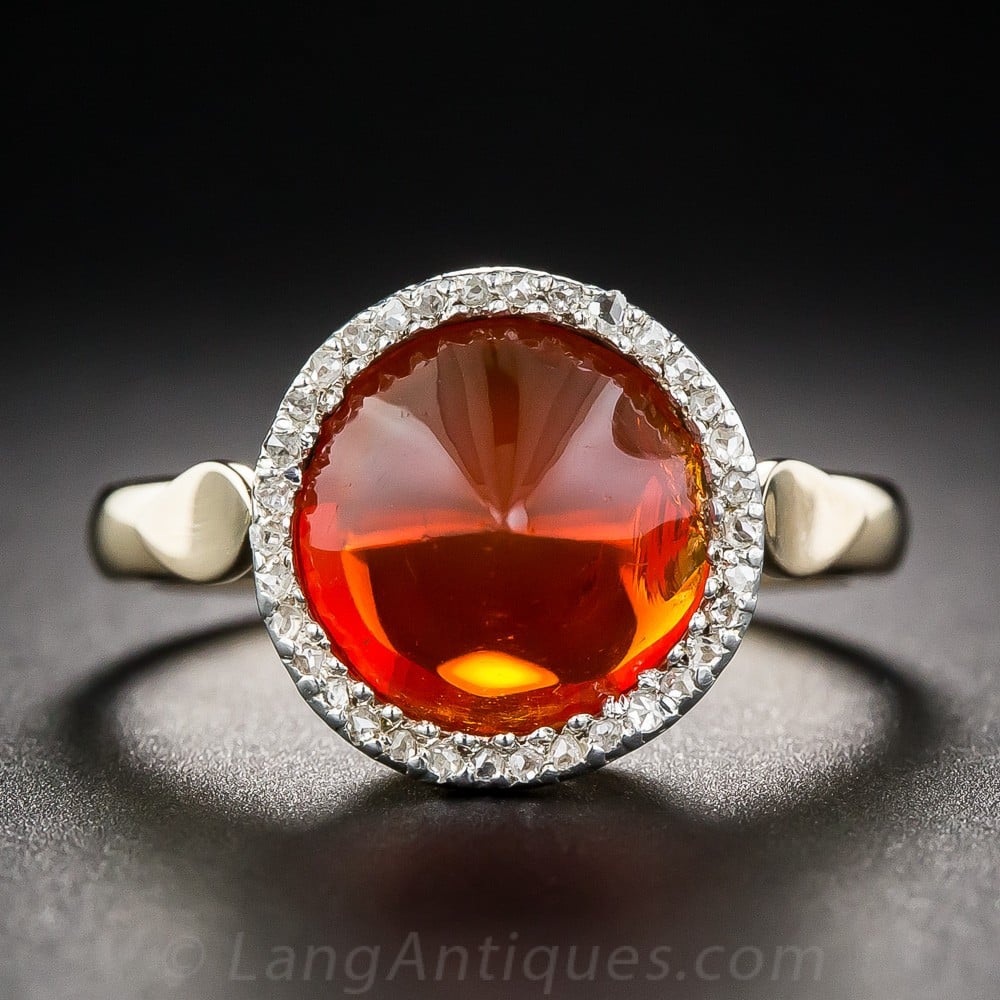 ​Opal is the birthstone for those born in the month of October and is the official stone of the Commonwealth of Australia and of the state of Nevada in the United States. While it is currently a widely worn and popular gem, no other gemstone has quite the same widely storied background of legend, lore, and superstition as the opal. 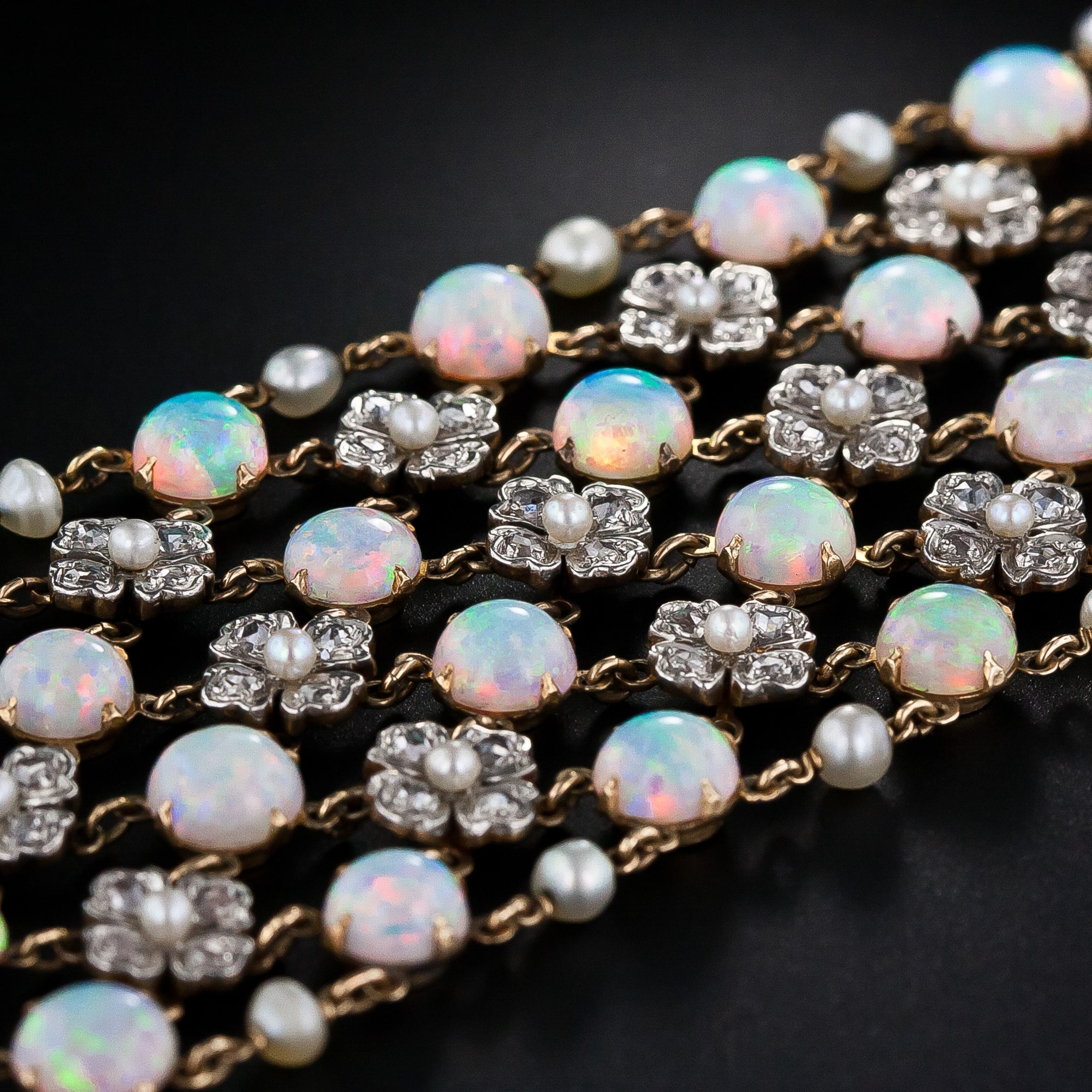 The history of the opal starts off innocently enough. In early civilization, opals were believed to possess powers of a positive nature. For example, many believed that opals had a magical quality that enhanced the wearer’s farsightedness. Opals were also thought to have the power to amplify and clarify feelings and emotions, lessen inhibitions, and enhance spontaneity. The Greeks imbued opals with qualities of prophecy and the Arabians thought opals came to earth in flashes of lightning. The Romans believed the opal to be a combination of all the beauty of all precious stones rolled into one. A favorite gift of the Ceasars to their wives, opal was given as a token of hope, purity, and good luck. Perhaps it was a Roman Senator named Nonius who really sealed Cleopatra’s fate with a certain asp when he refused to sell his beautiful opal to Mark Anthony, who in turn wanted to give it as a present to the Egyptian queen. Nonius so believed in the powers of his opal that he preferred exile rather than bow to Mark Anthony’s demands that he separate himself from his lucky stone.

By the Middle Ages, opals were mined in Hungary and were still generally regarded as a positive talisman. During the reign of Queen Elizabeth, the opal was regarded as a stone with as many positive virtues as it had hues and colors. Blond women wore them as a guardian of the beautiful color of their hair. Shakespeare used the opal in the “Twelfth Night” when the clown says to the Duke “Now the melancholy God protect thee, and the Tailor make thy garment of changeable taffeta, for thy mind is very opal.”

The first hint of the public’s change in attitude toward the opal started in the sixteenth century; the beginning of a period of great superstition among the masses. Yet, this change in social behavior initially did little to alter the perception of the opal, with its owners still believing that – since opals were so beautiful – they could only bring joy and good fortune.

All that changed by the seventeenth and eighteenth centuries. Times were difficult and uncertain and people were looking for a scapegoat for the pestilence and famine, including the resurgence of the Black Plague, that stalked the land. At some point, opals began to be regarded with suspicion and the idea that they had malevolent powers to spread misfortune took hold. 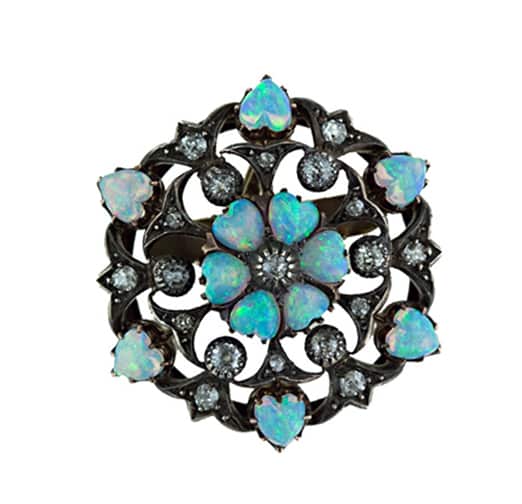 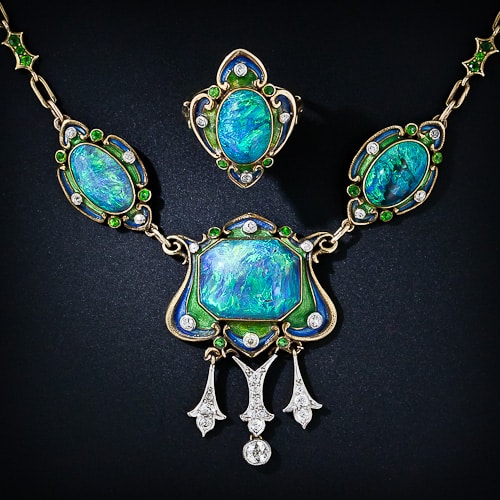 Another possible source for the negative reputation of the opal may have been based on the challenges faced by jewelers in fashioning and setting the stones. Because of its very brittle nature, opals were – and still are – difficult to cut and tricky to set. Louis XI of France once ordered his stunned jeweler’s hands cut off as punishment for the accidental destruction of a royal opal. No wonder jewelers thought the stones were unlucky! Ignoring the trend of the time was Napoleon Bonaparte who, during his reign, had opals set in the Crown Jewels of France. Whether this decision had anything to do with his fate later at the Battle of Waterloo is still open to debate in some quarters.

Superstitions and bad luck tales regarding opals may also have their roots in a literary classic. In his novel “Anne of Geierstein” (1829), Sir Walter Scott wrote that the enchanted Baroness character named Hermione always wore an opal in her hair. This opal is said to have reflected the moods of the wearer; sparkling when she was happy, showing red when she was angry and dull when sprinkled with holy water. The fate of the Baroness was a broken spell, the end of her enchantment and the reduction of Hermione to a pile of ashes. The popularity of this book sunk the reputation of opals to new lows for decades to come. Ironically, it was the opal’s own traits that assisted in reinforcing its negative reputation. For what other gem could possibly display the required colors and sensitivity to moisture required for the plot of Sir Scott’s novel but an opal? Authorities on the subject have concluded that Sir Walter Scott meant no harm to the opal and in fact careful reading of the story shows no representation of the opal, per se, as unlucky. The opal reflected – not dictated – the mood of the wearer (Hermione of Arnheim).1

Not everyone subscribed to the negative view of opals that were espoused in the nineteenth century. A lover of the beauty of opals, Queen Victoria made certain that all her subjects knew she did not put any stock in the rumors and superstitions surrounding the stones. Proving her point, she wore and collected opals throughout her epic reign. Because of Queen Victoria’s example, the opal was able to re-establish some of its former popularity with the public from 1850 onward (particularly after the discovery of the opal mines in Australia in the 1840’s).

Another bizarre twist contributing to the blighting of opals’ reputations occurred after black opals were discovered in 1900. Someone – probably a person possessing a lot of black opals – perpetuated the logic that while white opals were bad luck, black opals were lucky. Enter the diamond dealers who, fearing the popularity of the black opal, sent their PR machine into overdrive spreading the word that these black opals were themselves very, very bad luck, too.

In the twentieth century, opals regained some of their popularity as accent stones in Art Deco jewelry, as birthstone jewelry, and, in the mid to late twentieth century, in art jewelry. However, certain habits die hard and in certain areas of Europe and the Middle East there are still some jewelers who to this day will not sell opals – and there are also customers who will not buy them. 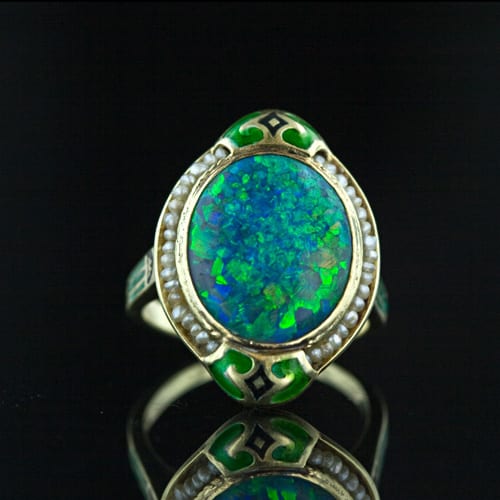 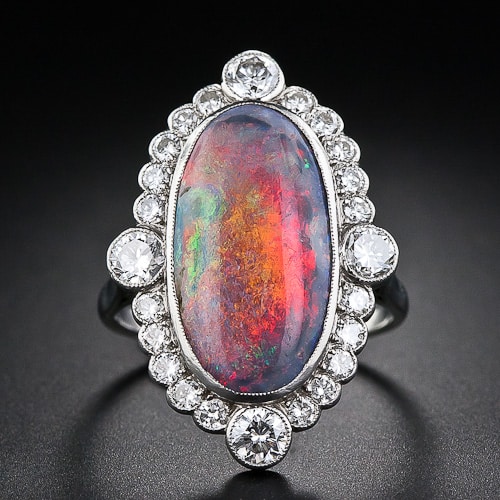 The oldest sources for opals were the mines located in the Czech Republic and Slovakia. Dating as far back as to Roman times these mines produced stones historically attributed as Hungarian opals due to the overlapping of borders during that time period. Opals continued to be mined in these areas until 1922 when a combination of declining production and the popularity of Australian opals ended the Czech Republic’s reign as the world’s opal producer. Today there remains only recreational mining in this region.

Currently, 97% of the world’s opal comes from Australia. 60% of Australian opal is white opal, 8% is black opal and the remainder is crystal and bolder opal.